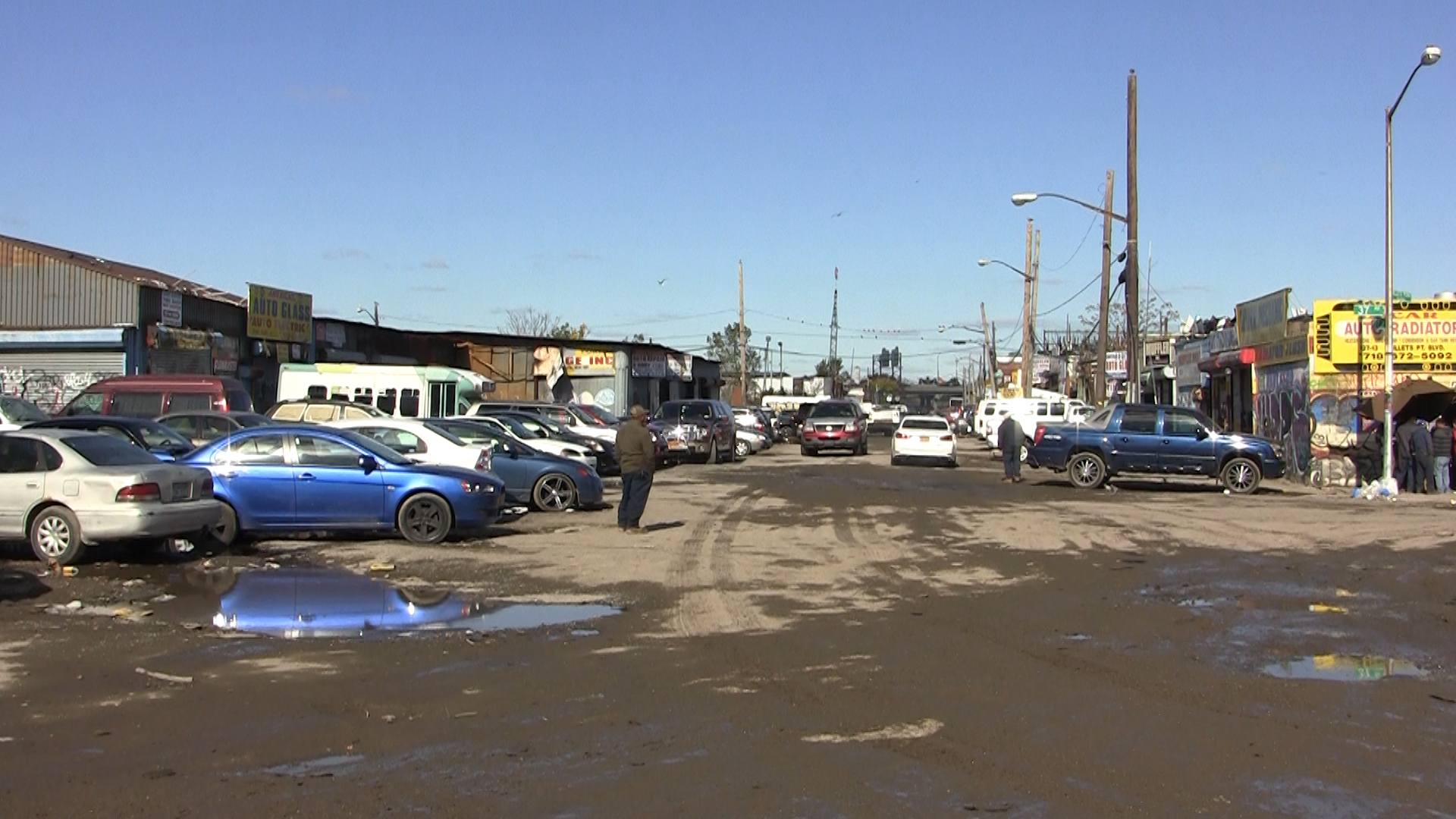 The battle for Willets Point involves saving park land and a recycling hub. 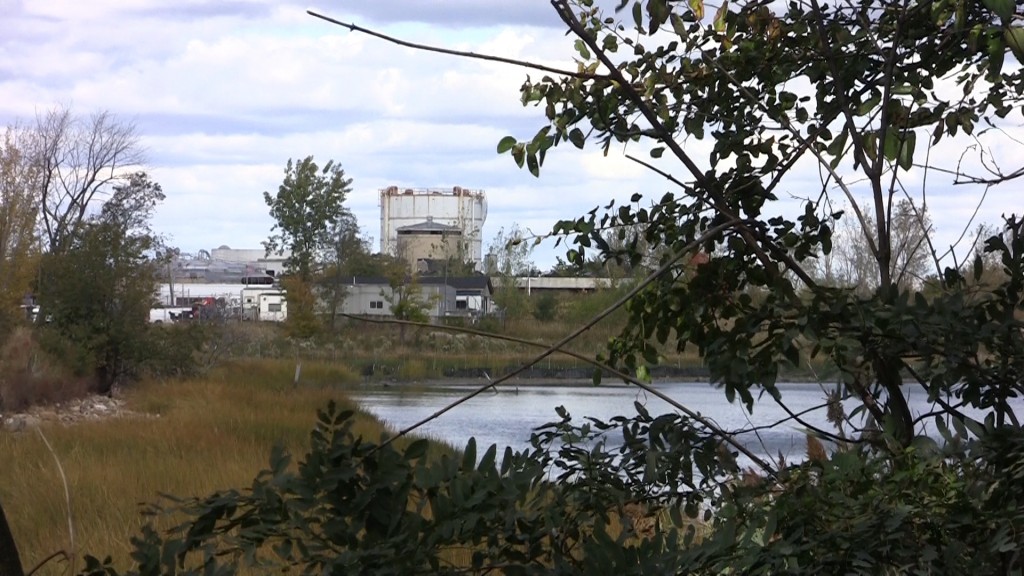 Tallman Water Pollution plant off the coast of Powell Cove Park may be the recipient of more waste due to upzoning.

On an early Saturday morning, a small group of volunteers equipped with gloves and garbage bags line the coast at Powell’s Cove to clean up the trash and debris that keeps this site from achieving its full recreational potential.

Wooden planks, assorted plastics, foam, and even syringes were found by volunteers as they spent the day removing trash and filling up a 30 cubic yard dumpster revealing what was left of a once a healthy beach.

“It’s pretty overwhelming [when] you see the amount of trash, but each time we come out here

we make it a little bit nicer to look at and improve the ecosystem for the wildlife that lives here,” says Katheryn Cervino, College Point resident and Vice President of Coastal Preservation Network who enlists volunteers three times a year to clean up the coastal park.

Looking out on the shore of the park, the large white tower of the Tallman Water Pollution Control Plant (WPCP), which services the northeast sections of Queens, can be seen. The plant, built in 1939, was no longer doing a sufficient job at processing and maintaining waste as was evident from the “rotten egg” smell that loomed over the coastline. Environmental advocates had implored the city to improve the facility and in 2012 the Department of Environmental Protection (DEP) began the upgrade

As of this August, the final piece to the upgrade puzzle was completed when the $30 million interceptor sewer line and Combined Sewer Overflow (CSO) tank was placed in College Point to significantly reduce sewer overflow into local waterbodies. However, environmental advocates argue that increased upzoning puts the upgrade at risk of becoming inconsequential.

allows the facility to make it run more efficiently. Before these upgrades, heavy rains would cause the existing sewer line of the treatment plant to back up and overflow into the surrounding Flushing Bay, Powells Cove and Little Bay. This backup

of storm water and untreated liquid waste threatened the health of marine life along the Queens coastline. Since the upgrade, the CSO tank acts as a reserve for backed up combined sewage that seeps into the treatment plant once the heavy rain ends and the plant lines are no longer overloaded.

“I commend them for doing it,” said marine biologist James Cervino about the CSO upgrade. “It works; it’s excellent but did [they] calculate the population increase because of improper, inefficient, illogical zoning laws that have increased and upzoned instead of downzoned,” he asked of the looming residential and commercial development because he feels that more land should be used for environmental maintenance instead.

The particular upzoning refers to the $3 billion megaproject at Willets Point that will include residential as well as commercial development. This industrial neighborhood, consisting mainly of auto repair

shops and scrapyards, is currently as good as a ghost town with only 30 of its 100+ businesses still just barely operating.

The city has been trying to do a major overhaul on this area for decades and has invested nearly $400 million along the way but nothing has stuck to render it complete. The most recent attempt to revive the area consisted of a deal between then mayor Michael Bloomberg and the Queens Development Group. As reported by Crain’s New York Business, that plan called for the demolishing of 23 acres of junkyards and auto shops, cleaning the soil and installing

never before had infrastructure such as sewers. The site would also include a 1.4 million-square-foot mall west of Citi Field.

In June 2015, this deal hit a snag when an appellate court blocked the mega-mall proposal. The lawsuit, brought against the developer by State Senator Tony Avella and other Willets Point advocates, argued that the project would encroach on city parkland and that developers didn’t obtain the necessary state legislative approval to proceed. The developer has appealed this ruling but the de Blasio administration boldly opted out of supporting the appeal. Although de Blasio wants to see the redevelopment happen, this move, seems to be a way to push his affordable housing

agenda, ensuring that the developers agree to include it in the new deal.

The implication of this project may be just as big, if not bigger, than the project itself. Supporters of the redevelopment such as the New York Economic Development Corporation touts it as an “engine for economic growth that will generate local employment and business opportunities

, and improve the overall quality of life for local residents.”

There are conflicting reports as to whether Willets Point sewers would connect to the Tallman WPCP or the Bowery Bay WPCP. The Bowery Bay WPCP, which receives waste from the northwestern section of Queens, got the green light to receive upgrades

by Governor Andrew Cuomo in 2013 to include a chemical bulk storage tank replacement and main sewage pump upgrades. However, it is not clear whether those upgrades have yet been completed or if they will prevent pollution from sewage overflow. Efforts to reach the Queens Redevelopment Group and DEP for verification were unsuccessful at the time of publication.

Environmental activists see the project as a threat. Regardless of where the sewage is routed, the upzoning promises an increase in population and therefore traffic, noise and air pollution as well as an added pressure on the sewage system despite upgrades. The way environmentalists see it, more people equals more waste and the added pressure on the WPCPs will inevitably break an already damaged ecosystem.

The science seems to favor the environmentalists. Human waste contains ammonia, which when it seeps into waterways untreated breaks down into nitrogen and promotes the growth of algal blooms. When left unchecked these blooms proliferate in the water and on the coastline stealing the oxygen from the water and sand and thereby killing the marine life. This process is called anoxia as a result of eutrophication and ultimately leads to the creation hydrogen sulfide—the cause of the “rotten egg” smell.

Marine life is essential to the food chain and health of our waterways and coast. Mussels, oysters and other shellfish act as nature’s water treatments plants because as they filter seawater to feed, they also clear it of harmful toxins and carbon. Cervino, who has cultivated his own oyster colony and seagrasses along an already cleaned section of Powells Cove warns that if the breakdown of marine life continues it will inevitably have an undeniable effect on humans.

“An unhealthy ecosystem leads to disease in marine life, which will lead to more fecal species of viruses and bacteria that will get people sick,” he says. “[There will be] a wide variety of pathologies that can cascade into serious sickness and widespread infections if people don’t treat their coasts in a manner conducive to marine health.”