Green Roofs, An Urban Ecosystem For Kids to Learn?

Six years ago when Vicki Sando, a parent and science coordinator of PS 41, started a few native plants in pots on the school playground, no one would think that it would one day become a rooftop ecosystem as large as three basketball courts.

“Kids are just loving coming up to the roof, since they normally don’t have access to this part of the school,” said Sando. “City kids don’t get a lot of opportunities to get their hands dirty. It’s like a special treat for them.” 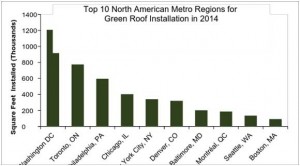 Being in a crowded city like New York, most schools don’t have enough space on their ground floor to build a garden. Therefore schools like PS 41 turn to their roofs. The PS 41 green roof cost $2 million, which Sando raised and was designed to connect urban students to nature by integrating the roof into the existing curriculum.

After the heat wave in 1995 that killed over 700 people, Chicago started to take measures to cool the city temperature during the summer. Building green roofs is one of the actions. As the front-runner of the green roof trend, Chicago installed one of the earliest and most well-known green roofs in America on their City Hall. Since then, 7 million square feet of green roofs have been built in the city in the past decade. Other cities are keeping abreast with Chicago. Organizations like AFF in Washington DC has been urging environmental education for children based on urban greenery for decades.

New York City is lagging behind.

“New York City is a lot denser than other cities, so finding usable roof space at a workable cost may be more of a challenge,” said Emily Fano, a senior manager of Eco-schools program from National Wildlife Federal. New York has over 8 million people, compared to Chicago (less than 3 million) and Washington DC (under 700,000). “The real estate costs are astronomical in New York City and so are the labor costs. There are also many building codes and laws that need to be adhered to. Policy and politics may also be more complicated here,” added Fano.

Despite high costs and bureaucratic barriers in the city, New York is trying to catch up. It first started on the government and commercial buildings, and now more school buildings are installing green roofs to connect children with nature. “The two schools — MS 442 in Brooklyn and Bronx Design and Construction Academy — that I have been giving advice to built their green roofs with less amount of money, ” said Sando of PS 41.“Their roofs are not the scale as PS 41’s, but they can still use it for educational purposes.” 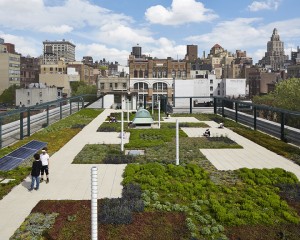 On the roof, the students from PS 41, ranging from Pre-K to the fifth grade, would dig a hole and bury seeds in the soil; they chase after butterflies and bees; they catch ladybugs and worms under the pebbles. Sometimes, hawks circle around and swoop down to hunt, leaving lots of headless pigeons and sparrows on the roof.

“Kids just love to find dead birds through plants. For weeks, they would watch the bodies decompose,” said Sando. “As soon as we set up the roof, we got a lot of wild life up here. It became quite a natural habitat.”

As children in big cities are getting more disconnected from nature, urban educators are trying their best to provide opportunities for children to learn about nature. “Our next generation needs knowledge and skills to face the environmental challenges that we may encounter in the future,” said Vanessa Bullwinkles, the director of communications of AFF.

There are also children with psychological problems benefiting from connecting with nature. Studies show that spending time in green settings helps reduce the symptoms of AD/HD in children. “AD/HD affects up to seven percent of children. Research findings suggest adding trees and greenery where children spend a lot of time, such as near homes and schools, and encouraging kids with AD/HD to play in green spaces may help supplement established treatments to improve children’s functioning,” writes Dr. Frances Kuo in research from Landscape and Human Health Lab, University of Illinois.

PS 41 offers teachers an innovative way to incorporating environmental education into an elementary curriculum. Children learn to respect Mother Nature and the eco-chain by observing various kinds of insects and birds. They learn about how plants reproduce by spreading seeds through wind, bees, or birds.

“I like those fluffy seeds. They can travel around in the wind. When they land somewhere different, they are spreading their type of plant,” said Asha Toczon, a third-grader in PS 41. She knelt down by a bunch of thyme, dug up a hole and buried some gossamer seeds in the soil. Her hands were covered with dirt, but she didn’t seem to mind it. “I want to be a scientist when I grow up.”

Despite Asha’s  enthusiasm the demands of the Common Core curriculum and test prep means that she and many of PS41’s students don’t enjoy their rooftop garden all that much, according to students. “There are many reasons that prevent students from getting more involved in green roofs,” said Fano, of Eco-schools program. “Teachers may lack time and knowledge for how to use green roofs as a classroom. They may lack the creativity and imagination to incorporate green roofs with the existing courses.”

In addition, although the green roof on PS 41’s school building attracts wildlife from monarch butterflies, migrating birds to hawks, the numbers remain small as the natural habitats it creates are narrow.

Despite the interest in green roofs from education circles, it may be difficult for most schools to follow in PS 41’s footsteps. PS 41, a top school in he city, has the advantage of having one of the richest PTAs in the city. “If a school don’t have a garden at all, I’ll always recommend them to start [building green settings] on a ground level, because maintenance or just upkeep of a green roof over time is a commitment,” said Sando.

At the beginning of this project, Sando was juggling between two roles — being a parent and a volunteer worker for the green roof. Her family did not appreciate the magnitude of the project, which took 6 years to build and a lot of her time and energy. But once they saw the outcome they have come to understand.

“The value of having a green roof cannot be underestimated,” said Sando. “Then, of course, if  some schools need new computers or a new library, maybe building a green roof is not a top priority.”