A local Initiative For a Global Issue

New York, the country’s only state with both marine and Great Lake coastlines, has continued to suffer as a result of coastal pollution with over 50 percent of the coastlines deemed as having over the threshold levels of bacteria.

The state which boasts over 300 beaches has continued to suffer the impact of coastal pollution due to a variety of reasons such as broken sewage systems and non-degradable debris being dumped in the ocean.

As a result of the coastal pollution, environmentalists, marine biologists and conservationists have taken it upon themselves to work towards a healthy coastline.

“We want to improve the eco-system and teach people the effects and importance of wetland and coastal preservation,” said Kathy Cervino, an activist working on the Powells Cove Park Coastline in Queens. “The tide brings in plastic and Styrofoam and we try to clean them up as much as possible.”

Cervino, together with a host of other volunteers, are part of the Coastal Preservation Network (CPN), a non-profit organization based in nearby Cove Park. They volunteer three times a year to clean up Powells Cove Park Coastline in Queens. Cervino, Vice President of CPN, has organized the event since 2002 and has a multitude of neighbors, activists, environmentalists and children who make the pilgrimage to Queens.

“The debris we collect fits into a 30 cubic yard container,” she said. “When we are back after four months, it doesn’t feel like we have done much but we know we have done a lot. Within the four months, the tide brings the Styrofoam and plastic and doesn’t take it away.”

A volunteer at the event, Mathew Gillam, said that he isn’t surprised by the amount of debris found on the seemingly innocuous coastline. “Picking up the debris once or twice a year makes a huge difference,” he said. “The thickness of the garbage was more before the Coastal Preservation Network started doing events of this kind.”

CPN’s most recent clean up in October drew a crowd of more than 50 volunteers. The debris they retrieved ranged from plastic bags, aluminum cans and other non-degradable items scattered around the small stretch of the shore.

“This is an issue that affects the city and the world,” said Michael Degaetono, a member of Thunderbeard, an organization committed to find solutions and prevent coastal pollution. “A pollution free coastline is important for the eco-system and directly impacts carbon levels and climate change.”

A safety threshold imposed by the National Resource Defense Council in conjunction with the New York Department of State to monitor the level of unhealthy bacteria caused by pollutants to the ocean found a systemic problem in the bacteria levels in beaches.

Dr. James Cervino, a Marine Biologist who is married to Kathy of the CPN, has gone a step further in his attempts to preserve the Powell’s Cove shoreline, using Oyster cultivation and solar panels to protect it.

“The Oysters and the seagrass stimulated by solar power electricity ensure the prevention of erosion. The power from the Solar Panels gives heat to lime grass and the generated heat attracts Oysters and ensures they grow faster,” he said.

The work done by Dr. Cervino is a part of a broader network of such projects aimed at coastal conservation done in collaboration with academics and activists.

Dr. Thomas Goreau, an author of many books including Innovative Methods of Marine System Restoration said that the project spearhead by Dr. Cervico has born fruit.

“Our results to date show that we are able to grow both seagrass and oysters much faster and with much higher survival under conditions of toxic waste and wave exposure that would normally kill them, being able to grow oysters over winter when they normally stop growing, and to grow salt marsh seaward of its normal lower limit, allowing us to reverse erosion and build out shorelines,” he wrote in an email response.

The initiative, among many others, takes place along the other block of the coastline, on which the day’s clean up took place.

“People have been disgusted by the trash and an event of this kind creates a good sense of community spirit and service,” said Kathy Cervino. “We rally people and try to make a difference.” 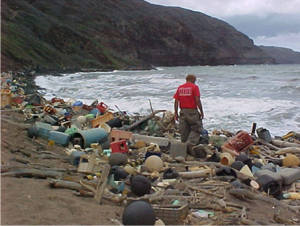