“I just lift those windows and clean black dirt off the windowsills maybe twice or three times a week,” DelGrosso says. “Especially in the summer I know it’s going to blow into the apartment when I have the windows open.” 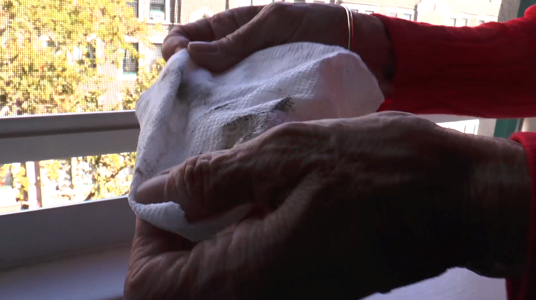 Residents in Jackson Heights and Flushing are upset at the black soot building up on their windowsills from airplanes flying ahead.

The mysterious piles of black dirt on DelGrosso’s windowsills started building after the Federal Aviation Administration (FAA) changed flight patterns at LaGuardia Airport. The changes have put DelGrosso’s apartment, and much of Jackson Heights and Flushing, directly in the flight path causing many residents to notice a drastic increase in air pollution caused by the airplanes. Black dirt has become commonplace.

“There was nothing in the early years I was here,” she said. “The neighborhood was clean. It was spotless.”

In 2012, the FAA implemented the program called Next Generation Air Transportation System (NextGen), which altered these airplane flight paths from flying over parks to now fly over dense residential areas like Jackson Heights and Flushing. According to the FAA, NextGen uses a very precise algorithm to direct most flights paths along a single, organized line, which is supposed to minimize airplane emissions from a larger area by narrowing them to a smaller area. These smaller areas consist of neighborhoods like Jackson Heights and Flushing and residents get most of the brunt of this emission.

Carmine Gallo, Regional Administrator of the FAA, says the purpose behind NextGen is to provide new benefits for the airport safety and modernize airport traffic control systems. He says the flight paths have stayed relatively the same since NextGen’s implementation.

“There has been no significant changes in the flight patterns,” Gallo says. “There’s still an option to fly over parks, and they have always flown over residential neighborhoods in and around the New York Metropolitan Area.”

In May of 2015, a proposed $4 billion redevelopment of LaGuardia airport was approved. The overhaul of the airport, which is backed by the Port Authority of New York and New Jersey (PANYNJ), and Mayor Bill de Blasio, consists of essentially tearing down the current airport and completely rebuilding a new one. The purpose behind this demolition process is to alter the small existing central passenger terminal, Terminal B, in order to build a larger one. The functionality of the airport is supposed to be more efficient in order to comfortably handle the growing demand of its 13 million annual travelers.

“I’m not going to move, [but] I am very concerned about the jet fuel emissions,” Brodeur says. “Supposedly they have been reduced, but if you consider a decade or two of that I’m sure the buildup would be too rich for us to bear.”

In addition, the PANYNJ says that most of this redevelopment program is also to enlarge the terminal building to accommodate for a larger sized aircrafts. This will also allow for much of the airport to be up to code with current standards of airport safety regulations.

According to researchers, airplane emissions kill about ten thousand people each year. A recent study that was conducted by the New Jersey Institute of Technology says that with the development of new and larger airports, there is a significant growth of toxic airplane emissions. These toxic particles, including lead, nitrogen oxides, particulate matter, sulfur oxide and volatile organic compounds, are actually classified as toxic inhalants from the EPA. Also, residents and animals that live within a 9 mile radius of an airport are 10 times more likely to inhale these toxic chemicals than residents who don’t live near airports. The Partnership for Air Transportation Noise and Emissions Reduction also concluded that there is also a direct correlation to airplane noise and cardiovascular arousal, which can lead to obesity, diabetes, hypertension and eventually heart disease.

The EPA doesn’t currently regulate the emissions released by airplanes. Flushing’s City Councilwoman Grace Meng has been very proactive in enacting a bill called the Quiet Communities Act of 2015 that would require the EPA to take over the FAA in fighting noise and air pollution complaints. The bill is currently in legislation and would restore the EPA’s Office of Noise Abatement and Control, which was disassembled from budget cuts by the Reagan Administration in 1981.

Susan Carroll, longtime resident of Flushing and independent local activist, says she is worried about the air pollution constantly.

“I don’t know what we’re breathing in over here,” Carroll says. “This concentration of pollution every single day is [scary]. The EPA should get involved and take over.”

The FAA is promising a change and has already started the process of reducing air pollution by replacing out-of-date airplanes with energy- efficient ones. It is hopeful that in 2025, the aviation industry is expected to have 52 percent of its commercial aircrafts in the United States switched to energy-efficient ones, and 86 percent of aircrafts will be energy-efficient by 2035. Residents can make complaints on the PANYNJ website about the emissions and noise from planes, but residents like DelGrosso feel that these complaints go unheard.

“Anyone who lives in a city like this can be concerned but what can you do? You can walk around with a mask on your face but you just hope that they’re over blowing the issue, but I doubt it,” DelGrosso says. “Lord only knows the cancer rates are increasing especially in the lungs and the esophagus. I don’t know for myself.”