Another important function of Green Infrastructure is to prevent surface flooding.

Three years ago Hurricane Sandy devastated the coastline of New York City and paralyzed parts of the city by cutting off the electricity and running water. Moreover, flooding took away people’s homes. In order to prevent such damage from happening again NYC has been working on pushing green infrastructure to face the challenge of the next big storm. Despite the effort, there is still a lot of work to be done.

“New York City actually has made a goal for themselves, to absorb at least 10 percent of all of the water fall all over the city year around with green infrastructure,” said Inger Yancey, founder and president of the Brooklyn Greenroof, a green roof installation company. “In order to get to that point, they need to build a lot of green infrastructure that doesn’t exist right now.” 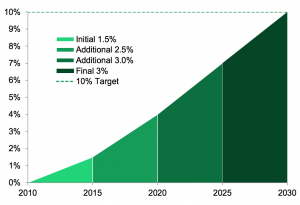 (2012 consent order milestones on the percentage of stormwater that can be treated by green infrastructure Source: New York City Department of Environmental Protection)

The 10 percent that Yancey mentioned so far is just a goal. According to the 2014 Green Infrastructure Annual Report, the New York City Department of Environmental Protection (DEP) expects the 1.5 percent target will be reached by 2016. So for now, where does the other 99 percent of stormwater go? The destination would be the sewer system.

Currently, approximately 72 percent of NYC’s 305 square miles in land area are covered by impervious surface, which would generate a significant amount of stormwater. “All of the water that is hitting these surfaces is going into the sewer system all at once,” said Yancey. “And this would completely overwhelm the sewer system.”

The main reason that the flooding happened is always considered to be the size of the sewer pipe, which is called “grey infrastructure” in stormwater management industry. “The pipes are not sized to convey the water at that rate, so you get surface flooding because the water can’t get into the system quickly enough,” said Anne Ronan, a civil and urban engineering professor at NYU. “And then you get the back up in the sewers, when the sewer get filled so quickly.”

But from DEP’s perspective, the cause of flooding is never just about the sewer. According to the National Weather Service Forecast Office, the average rainfall in the City has increased nearly 10 percent in the past century. Extreme weather has become a predominant factor that contributes to flooding.

The blocking of catch basin grates is also another serious cause of flooding. Debris like leaves, gum wrappers and other trash can block the grate completely so the water cannot enter the storm sewers, according to the DEP.

In order to lower the potential threat of flooding, DEP has been working on building different types of green infrastructure such as right-of-way (ROW) bioswales, green roofs, and rain gardens. To date, DEP has encumbered over $200 million in capital funding and almost $8 million in expense funding toward the program, according to the 2014 GI Annual Report.

The capital project of DEP’s green infrastructure program is building ROW bioswales, and designated the three most vulnerable areas as priority areas to build bioswales. These three areas are Flushing Bay, Bronx River and Newtown Creek. “The green infrastructure helps slowing down the water, reducing the volume of water,” said Ronan.

Besides building green infrastructure on public spaces, DEP also employs several programs such as the Green Roof Tax Abatement and the GI Grant Program to encourage citizens’ participation. Homeowners who install green roof on their property will be reimbursed for $5.23 per square foot back in a form of tax abatement.

As for the GI Grant program, private owners will be funded to integrate green infrastructure. Many grant recipients are universities and churches. And most of the green infrastructures that they are building are green roofs, according to Tricia Martin, owner of WE DESIGN, a NYC based design firm. 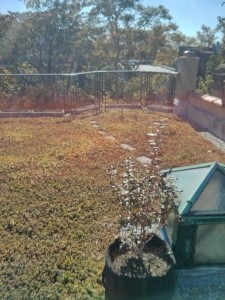 (Green roofs are considered as one of the major green infrastructure in NYC. Therefore, DEP has introduced policies that benefit home owners who build green roofs on their properties. Photo taken by Ying Lu)

Even though GI implementation gains such universal endorsement on its capacity to release the threat of flooding, and the DEP has put in a lot of effort to implement the building of green infrastructure, it still faces a lot of challenges. Tatsuya Nakagawa, VP Marketing & Strategy of Castagra Products Inc., a wastewater coating company, believes that green infrastructure is a great solution to deal with the potential flooding problem in NYC. But he also stressed the challenge of it is to deal with the City’s problem of space: “If you want to plant trees and grass, there isn’t so many places you can do that,” he said.

Similar to Nakagawa, Martin pointed out that finding locations for bioswales, one of the most important types of green infrastructure that DEP is promoting, is a great challenge in both technical and practical ways.

Technically speaking, Martin argued that “it is hard to know what is going on underground until you start digging it up.” She stressed the complicated procedures that have to go through before planting a bioswale – utility survey of the planting areas, soil boring, and urban design test to see if the location is really viable.

“Sometimes it is also having a conflict between land use and the green infrastructure itself,” Martin explained. “You might get community excited about putting in a bunch of bioswales, but then they get disappointed because the park department won’t let us put in bioswales under the trees.”

With such a variety of causes of flooding and multiple challenges in the ways of implementing the green infrastructure, even with the current multi-prong attack and significant effort on GI programs, the 10-percent-goal still has a long way to go.