Playing in nature is not that easy and common for children in New York City, where it can seem as if buildings take up every available space. But now, more and more schools are trying to explore their rooftops to give more opportunities for students to play and learn.

PS 41, a public elementary school located in Greenwich Village is one of them. The 15,000 square foot roof at PS 41 was a bare, idle place a decade ago. Now, it is a green place, covered with vegetation and soil, which can absorb about 157,000 gallons of storm water over a year. 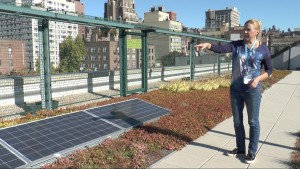 The saving of energy is another important benefit of green roofs. The Green Roof Energy Calculator, designed by researchers and staff at Portland State University, University of Toronto, and Green Roofs for Healthy Cities, shows that a 20,000 square foot rooftop covered with 50 percent area of 6-inch deep vegetation could save more than 6,000 kwh electricity compared with a total dark roof.

Schools with green roofs not only enjoy these environmental benefits, but also play an important role on education.

For students at PS 41, the 3-year-old green roof is not a place with a sign saying “No Entry” but a classroom teacher can integrate the green roof into their existing curriculum. Vicki Sando, the initiator of the project and also a teacher in PS 41, gives instructions to many different classes: art, math, science and social studies.

“For example, first grade teachers [and students] come and use the garden and observe it as a park, a habitat and make comparisons between our green roof and Washington Square Park,” said Sando. She also offers green roof technology classes after school, demonstrating how the wind power and solar panels work to provide energy to the green roof.

Like PS 41, some other schools in New York are using green roofs not only as a place for students to get close to nature but also a place to do more research. For example, Bronx Design and Construction Academy high school has a 1,500 square foot green roof and collaborates with Columbia University on research using the green roof.

For some other schools, the traditional green roof covered with sedum and plants survive easily is not enough for their education goal. Instead of paving soil and seeds on the rooftop, the Earth School used specially designed containers to grow vegetables, spices and plants on the roof top. The rooftop in the East Village is more like a rooftop farm than a usual green roof. It has more than 20 species of vegetables on the roof.

“When they come up here, they will just pick something up and try it,” said Colin Schumacher, the teacher and roof coordinator, picking and eating a kind of sage. “It’s good for kids to learn more about vegetables here.”

In order to collaborate with the earth science and cooking curriculum the Earth School enlarged its garden from the school basement to the rooftop. With the philosophy to make an edible garden and introduce new foods to children born and raised in New York City, the teachers also use the vegetables from the garden to provide snack for students.

To help more schools with similar goals, teachers, parents and volunteers from the Robert Simon Complex community started a non-profit organization called Fifth Street Farm. Students and parents from the Earth School, PS 64 and Tompkins Square Middle School, which are all in the same building, can plant and study vegetables on the 2,400-square-foot roof.

The trend is growing in New York City. Early this year, New York City’s School Construction Authority was soliciting bidders to install a green space on Public School 7’s roof. With more and more green roofs and rooftop gardens in schools, it may be easier for NYC students to get closer to nature.