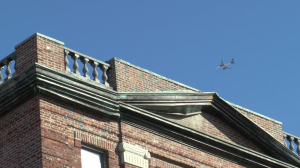 “Here in Queens, the noise of airplanes has gotten significantly louder, planes are flying lower, more air traffic, more jet fuel, more particulates left behind, air which are cancer causing. So it’s a concern for us all,” declared Andriette Redmann, Jackson Heights resident and member of Queens Quiet Skies, a non-profit organization working to change the airplane noise situation in the borough.

Noise, which is defined by the Environmental Protection Agency (EPA) as “unwanted or disturbing sound,” is caused in urban environments by multiple sources such as loud music or construction. But certain parts of the city are prey to noise disturbances caused by airplane noise due to the LaGuardia and John F. Kennedy airports. In June of this year, New York Governor Cuomo announced a $4 billion project to rebuild LaGuardia airport from scratch. Construction on this renovation is already underway, and the combination of noise from this project, in addition to the overhead noise from the airplanes has affected local residents enough for them to be incensed at the situation.

In fact, advocacy efforts have been stepped up in the community and a town hall meeting was held in October to address these concerns. The crowd of angry residents discovered that even local elected officials have not been spared the noise. “Over the weekend, I hear the planes flying over my apartment — so I hear it too,” said State Senator Jose Peralta at the meeting. “According to the Port Authority, we have on average 80 flights on weekends from the hours of 6am to 9am.”

Jackson Heights is directly in the flight path of planes taking off and landing from runway 22 of LaGuardia airport. In 2012, the FAA changed flight paths because of a new air traffic monitoring system called NextGen. Following the implementation of NextGen, residents charge the airplane noise problem has become much worse, with flights taking off as early as 5am and flying over their neighborhood more often.

It is NextGen’s advancements in navigation technology that seems to be the problem. “Before, the flights used to be dispersed across the space but NextGen is so accurate that everybody flies down a single track,” explains Len Schaier, President of Quiet Skies, a non-profit organization that advocates reducing airplane noise. “So the total number of people who are getting noise may be reduced because the flights are not getting dispersed, but the people under that track are getting belted.” There are 31 noise monitors in all of New York, and only 1 is located in Jackson Heights. The neighborhood recorded the most number of airplane noise complaints from 2014 to 2015. This monitor is located on 78th street and 30th avenue, in an area, residents say, that isn’t the most affected part of the neighborhood. In addition, there are questions over how data from the noise monitors is analyzed.

“Planes could come over our heads at 120 decibels every minute or every 2 minutes for hours and hours, but they average it in a 24 hour period and then they average it over the month, so it looks like the decibels are a lot less, so then they don’t have to take any action,” argued Andriette Redmann, Jackson Heights resident and member of Queens Quiet Skies.

The Port Authority’s response denies there is a problem with monitoring. “We catalog [the data] and on a monthly basis we share it with the FAA and partners and regulators so that we can further monitor the flight paths to make sure that the planes have not broken federal regulation in terms of noise” said Ian V Praagh, Acting Director, Community Relations of the Port Authority.

Currently, the maximum acceptable level of noise is 65 DNL after which individuals are at risk of developing health problems. A study by the National Institutes for Health (NIH) published in 2005 concluded that noise pollution leads to noise induced hearing impairment, but also cardiovascular problems, including increased blood pressure, as well as insomnia.

Schaier believes this number should be reduced to 55, because the normal noise levels in Queens are already teetering around 65. “I’m sure the government is scared of 55 being the level because then they’re going to have to do something about it,” he said. “People will start saying: ‘I don’t want to die from cardiovascular disease,’” he said.

In 2007, New York City updated its noise codes for the first time in 30 years. The EPA regulates “noise sources” including “rail and motor carriers,” but it has stated that it does not have jurisdiction over airplane noise. In New York, it is the Port Authority and the FAA that respond to complaints regarding noise pollution.

Exposure to high levels of noise on such a consistent basis has been shown by the EPA to be harmful to children, as it negatively affects their attention and ability to focus in school. The Port Authority response to this is to offer soundproofing grants for schools. According to the Port Authority a school is eligible for soundproofing if it falls in the 65 DNL contour. “We’ve soundproofed in the LaGuardia area, every school that falls in the current 65 DNL contour, helping children study in a quieter environment – so its windows, sound, insulation – and I think its been a rousing success,” said Ian Praagh of the Port Authority.

Both the FAA and the Port Authority have commissioned a Part 150 study, to assess the adverse affects of noise pollution in the areas surrounding the airports. However, despite promises to address concerns, the weather and the winds determine which runways are used—and many flights are re-routed through runway 22. The LaGuardia renovation will not build any new runways, but the current flight paths continue to hit the community hard. At the town hall meeting, both agencies iterated that noise levels in Jackson Heights will go down in an effective way by the end of November because construction in the affecting zone will subside.

Diana DelGrosso, has lived in Jackson Heights since 1957 and attended the town hall meeting, is one of many residents who remain dubious. “Its emotional and mental disturbance, even if it doesn’t break your eardrums,” she said. “It’s more than annoying. It’s an intrusion on your privacy, on your serenity.”