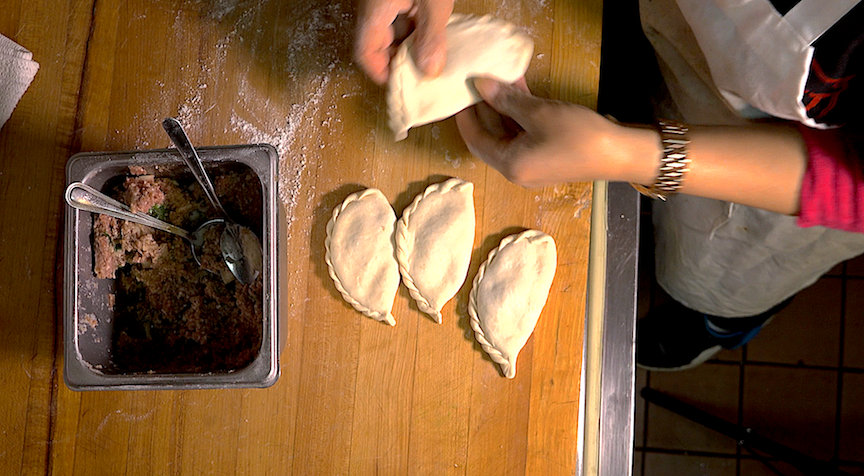 Seven thousand miles away from his family, Kunchok Tsering is a 48 years old Tibetan immigrant living by himself in Jackson Heights. Commuting back and forth on the 7 train from his job at the WholeFoods in midtown there is one thing he looks forward to: a cup of warm Tibetan butter tea, salted not sweet, and steamed dumplings.

“When something bad happens at the job, I come here and I forget everything after that,” says Kunchok, as he walked towards Cholsum Tibetan restaurant. Once inside the restaurant, the rumbling sound of the elevated 7 train above Roosevelt Avenue is replaced by the backdrop of Tibetan music. He asks for his usual Cup of Bod-Jha and beef Momo while talking in Tibetan with the restaurant owner who he knows from his regular visits. “The language I can speak here and the food I get here, I feel comfortable and happy,” he says.

The number of Tibetan owned restaurants in New York serving ethnic food has increased to eight from just one in the early 2000. However, the growth has been a difficult one. During that time at least four Tibetan restaurants have closed due to high rents and lack of profits only to be reopened with a different name by a different Tibetan owner. The rise in Tibetan businesses has it’s roots in the history of Tibetan immigration to the US. Tibetan immigration started in large scale only after 1992 with 1,000 Tibetan refugees being given asylum under the Tibetan U.S. Resettlement Project (TUSRP). Prior to this, there were only around 300 Tibetans living in the U.S. but today, New York and New Jersey has more than 7,000 Tibetan immigrants, the largest concentration in the country. The increasing number of Tibetan immigrants in New York as a result of family reunion and chain migration has assisted greatly for the currently opened restaurants to establish their business more strongly.

“The restaurants becomes a place of gathering when the community is small and Tibetans are conservative when it comes to food so a certain food habit always remains the same,” says Tsering Shakya, Tibetan historian and scholar. “Now the owners are already equipped with the set skills to cater to the target group who are seeking certain comfort food so the restaurant business is a way for an immigrant to self employ.”

Part of an empire

Small businesses account for 98 percent of all businesses in the state, according to the 2016 small business annual report of Empire State Development, the economic arm of state government. Small businesses are the source for more than half of the state’s private sector jobs.  Businesses with  0-19 employees in the “Accommodation and food services” has the highest number of employee with186,953 jobs in the 1st  quarter of 2015 . The second highest share in all job category next to retail businesses and this number is estimated only to grow.

As a part of small businesses, ethnic restaurants play an important role in the city’s economy and these are often the places where non-English speaking immigrants find their jobs, especially individuals with native cooking and culinary skills.

A source of history

Unique to this business, ethnic restaurants are a great source to understanding the history of the many immigrants groups present in the city.

“For historians, ethnic restaurants provide a rich source of material about the ebb and flow of immigration and the mixture of nationalities that have made New York (and the US) what it is,” says journalist William Grimes, of the New York Times, through an email interview. Grimes is the author of Appetite City: A Culinary History of New York and a former Times food critic.

“I think restaurants and, more generally, food, offer vivid glimpses into the past. Food is something everyone understands in a way they do not understand economics or diplomacy,” he says.

As is the case with restaurants serving ethnic food in the city, the initial target customers are the foreign born immigrants that are already accustomed to the food being served. Native born customers can come later often driven by curiosity and cheap prices. For instance, the popular Tibetan Momos are priced $7 a plate. “If I estimate, around 60 percent of my customers are Tibetans and from Himalayan countries and the most common ordered food is Momo,” said  Tenphal, the owner of Cholsum Tibetan restaurant  which opened a year and a half ago. “It is cheap”, goes one of the most repeated  Yelp review on Tibetan restaurants.

Across the street from Tenphal’s restaurant is Little Tibet which has already seen that type of cross over growth. Enter, and you will hear the murmuring in  different languages as people savor their food. Tibetan, English, French, Indian, Nepalese, Bhutanese and some days maybe more. From tourists to students in the city, the place is busting with enthusiast eaters. A French visitor volunteers: “This is not our first time here. We have been here before and the food is delicious. The wine is the best”.

Often the menus in Tibetan restaurants are not limited to Tibetan food alone, but includes cuisines from other countries such as Indian, Thai, Nepalese, etc. reflective of the global stoops of an exiled life of the community. Continuing the tradition, Little Tibet also sells locally brewed beers from Queens. However, It is not without first bringing Tibetan culture to the new world that the sharing of the experience would began.

Five decades after Chinese occupation of the country, Tibetans in exile and in Tibet have taken upon themselves the responsibility to keep the movement for justice alive. Especially for the communities in Exile, the preservation of the culture, whether it be language, religion, clothing or food, has been one of the most pivotal part of the greater political movement as the deliberate attempt at cultural assimilation in Tibet remains a huge threat.

In Jackson Heights, in the midst of a bustling metro life, these Tibetan restaurants represents that space, which for many non-Tibetans are their first contact with anything Tibetan. From the pictures of religious leaders on the walls to the letters written in Tibetan and to the food, the subtle stimulus has caused many to know about the rich culture of this Himalayan country.

“I think going to the museum is a different thing but if you bring your friends to a restaurant they will know more about the culture with which we live,” says Rinchen Lhamo, a Tibetan immigrant, who reached the US six months ago. “And then there is always someone speaking in a thick Khampa dialect, making me think about my late grandfather,” she adds, while drinking the hot bowl of vegetarian Thukpa.