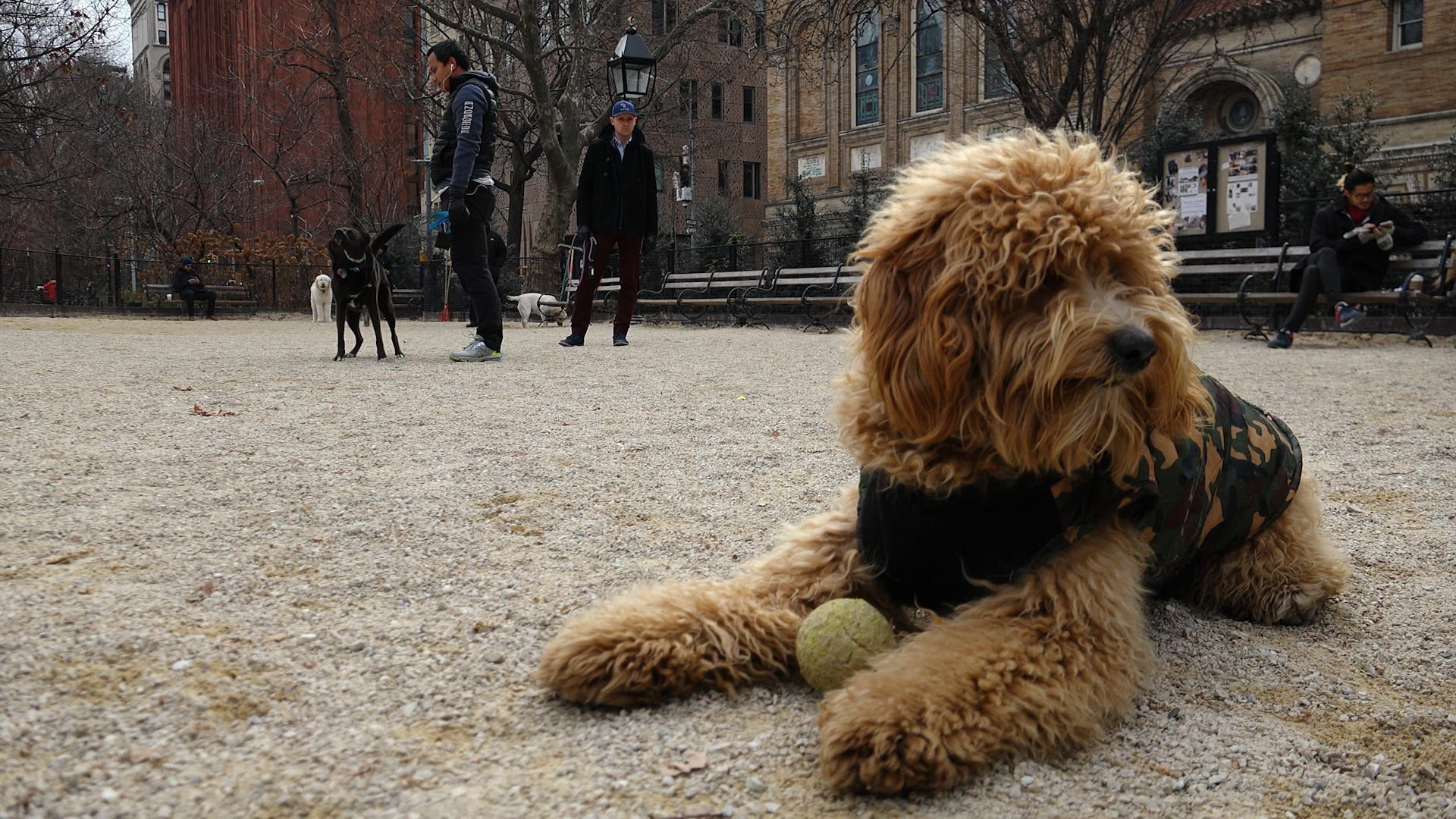 For The Four Legged Customers

On a chilly Sunday morning, the air around Washington Square Park in Downtown Manhattan is filled with noise. But this isn’t the human noise Raymond Carver wrote about, it’s barks. Loud, unabashed and carefree, the dogs of New York dominate the airwaves as their joyful cheer adds a much-needed sense of life to the gloomy overcast morning. They are running, chasing, jumping, walking, and sitting with their tails like the wings of a hummingbird. While all around them, their human parents watch, experiencing the kind of joy that only comes when someone else is happy because of you. New Yorkers love their dogs, just as much as they love anyone else in their life. To them, they are family, and family never has a price.

“Having a dog in New York city changes your life. You are social, you meet people wherever you go. Most times people will stop and talk to you remembering their own dog and tourists will trust you if they see you with a dog,” says Theresa Collins, an associate research assistant at Rutgers and longtime New York pet parent for Piper, her five-year-old Irish Setter who searched for her lost ball at the famous Dog Park at Washington Square Park. “This era of constant data assisted living is counteracted by the dog. It kind of dissolves the narcissism, that city living hyper capitalism brings in a fundamental way.”

The average dog owner in the US spends an estimated $1600 a year on their dog, according to the American Pet Products Association. The industry is expected to take in nearly $63 billion this year, an increase of almost 8 percent from the $58 billion in 2014. So, what caused this spike in spending? It’s due to the humanization of pets and the emergence of the high-end market for our four legged or winged family members.

A recent Harris poll indicated that 80 percent of Americans grow up with a pet. Those who grow up with pets are likely to own pets as adults ensuring the customer base for pet businesses is ever expanding. Another reason for this lies in the way Americans perceive their pets. The Harris Poll also found that over 95 percent of pet owners consider their pets as family

In a New York Post column from May, Lindsay Putnam argued for Paw-ternity, a version of maternity leave for new pet owners. It is a trend that has already garnered some traction in the UK. “While my co-workers with kids walk out the door at 6 p.m., no one seems to care that I also have a child at home waiting for dinner,” she writes of her cat, Jameson.

And it is to cater to these “pet parents” that a slew of new businesses has sprung up in New York over the past few years. The pet industry is not new, but services that were primarily product delivery based are now veering into previously uncharted directions. They are products and services that are essentially pet versions of their human counterparts.

PetPlate, a service that creates precooked gourmet meals for dogs, became the pet version of online food services. DogVacay, a company that matches you with other pet owners willing to board your dogs while you are on vacation is the AirBnB for pets. WagWalking, a New York based company that lets you schedule dog walking via an app is the Uber for our four legged friends. From tech products like Whistle, an activity monitor for your dog becomes its version of FitBit and TailTalk, a gadget that will read your dog’s emotions by monitoring her tail movements, to social networks for and Tinder-esque dating services, the market is evolving constantly. From luxury mouth sprays by Brooklyn based Gerrard Larriett that cost around $14 a bottle to Treat, a company offering at home nail trimming for your dog at $39 a session, the American pet has never been pampered more.

As per Angel.co, nearly 700 startups have been founded in the past decade, around the world, that cater to pets. Almost half of which are in the US. With over 1.1 million pets, New York has one of the largest pet populations in the world and over one-third of New York households have pets. This concentration of pets, the busy schedules of New Yorkers, and ample disposable income make the city the ideal ground zero for high end pet startups.

Back at Washington Square Park’s Dog Park Steven Rogers is tugging on the leash of his 10-month-old Golden Doodle, Ollie, and when asked how much he would be willing to spend on his dog the answer is both instant in delivery and resolved in conviction. “Many, many, dollars,” he says laughing. “He is our favorite child. We have two other children but he is the one who actually appreciates it when we spoil him rotten. So, it gives us a lot of pleasure to dress him up and give him toys and have him play around.”