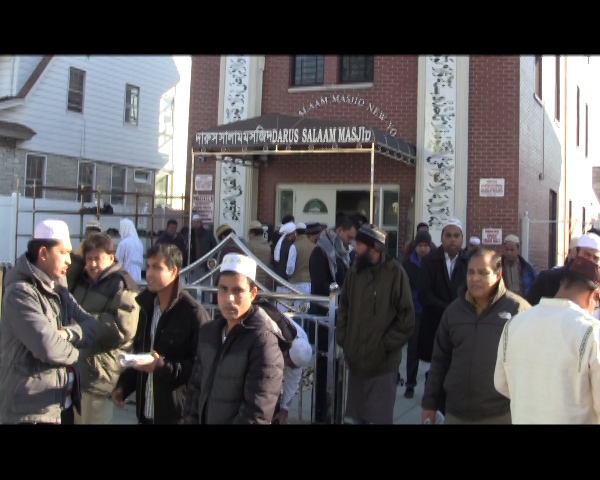 Muslims in New York Fear for their safety

The blanket ban imposed on refugees by Governors of at least 32 States and the continuous rhetoric in the political arena spearheaded by Republican Presidential candidate Donald Trump, has resulted in Muslims living in New York fearing for their safety.

“We are traumatized by everything. We feel suspicion and hate,” Dr. Ahmad Mohammad Rahman Chairman of the Jamaica Muslim Center told New York University.

A study conducted by Pew Research revealed that the United States is the home to 6.67 million adherents of the Islamic faith, which amounts to 2.11 percent of the total population in the country. According to Pew Muslims in New York City comprise over 600,000 the biggest population of Muslims in the state.

“We have been told to wear a hoodie or to cover our heads [over our hijab] and to ignore and not confront any person who speaks against us,” said Zara Nizar 24, a native of Maldives who been in New York for just over three months. “We have been told to just walk away from anything. This is supposed to be a free country and I don’t think we should mask our identity.”

The heightened fear among the diverse and often closely knit community comes in the wake of repeated anti-Islamic statements from leading politicians including Republican Presidential candidate Donald Trump who recently called for the immediate ban on Muslim immigration to the country.

“Much of the hate is veiled and there are many bigoted statements against us online but you find the occasional person speaking out,” Mahbuba Rahman a native of Bangladesh living in Queens, New York said.

The rise in Islamaphobic sentiments and hate speech directed at the Muslim community which was initially latent following the advent of the Islamic State (IS) in the Middle East, erupted subsequent to the terror attacks in Paris and the shootings in San Bernadino.

“After Paris everyone started to look at us differently,” said Asia Ahamed an official at the Jamaica Islamic Center. “We have suffered enough and we don’t need to go through this again. Islam is a religion of peace and compassion and all of us adhere to everything that is based on the premise of peace and compassion. But the finger is always directed at us when something happens and it seems like a never ending cycle.”

Ahmed went on to make distinctions in ideology and personality between the followers of the Islamic faith in New York, and those accused of the terror attacks.

“They don’t believe Islam and what they are doing in the name of Islam has got nothing to do with Islam. These are terrorist and horrible people, its something that they have in their personality and they are using a religion of peace to promote this personality,” she said.

Ahamed, also a native of Bangladesh said the community has struggled to overcome reactions felt locally to the continuous wave of global and local incidents involving acts of terror by purported adherents of the faith of Islam.

“This never seems to end and it comes one after the other. We are really in pain because of what many of us have to sometimes go through in this country,” she said.

The anti-Islamic rhetoric widely publicized by the mainstream media has also resulted in a spate of hate crimes targeted at Muslims.

Saker Haque, 53, an owner of a Deli in Astoria, Queens was attacked on Saturday December 5, by an individual claiming that he wanted to “kill all Muslims” local media reported. Other instances of hate crimes in the city and around the country include the harassment of Muslim students and hate mail directed at mosques.

The Muslim community in New York entails adherents from diverse religious and ethnic backgrounds including those from African countries. The majority however are from South East Asian backgrounds and follow a particular –Sunni- sect of Islam in contrast to the Islam practiced in the Middle East.

Jovel Kovel a political observer and co-founder of of Eco Socialist Horizons, an organization based on internationalist ideals opined that the root of the problem is at home.

“Shootings are a common thing in the US, and no US citizen was targeted in Paris. If these incidents results in a reaction such as what we see now, imagine how radicalized the citizens of the countries we have bombed over the years can get. Do we even stop to think about this?” he asked.

According to Kovel the creation of the IS was the result of Americas invasion of Iraq and its military involvement in Libya, a view shared by many observers, including Professor Noam Chomsky of the Massachusetts Institute of Technology.

Both Saddam Hussain and Muaamar-al- Gaddafi although dictatorial and despotic in their rule were secular in their approach to governance, quelling the rise of any extremist elements in the region.

“We all want to live peacefully,” said Asia Ahamed. “That’s all that we want. This is a country of the free and it was this freedom that we love the most about the country.”