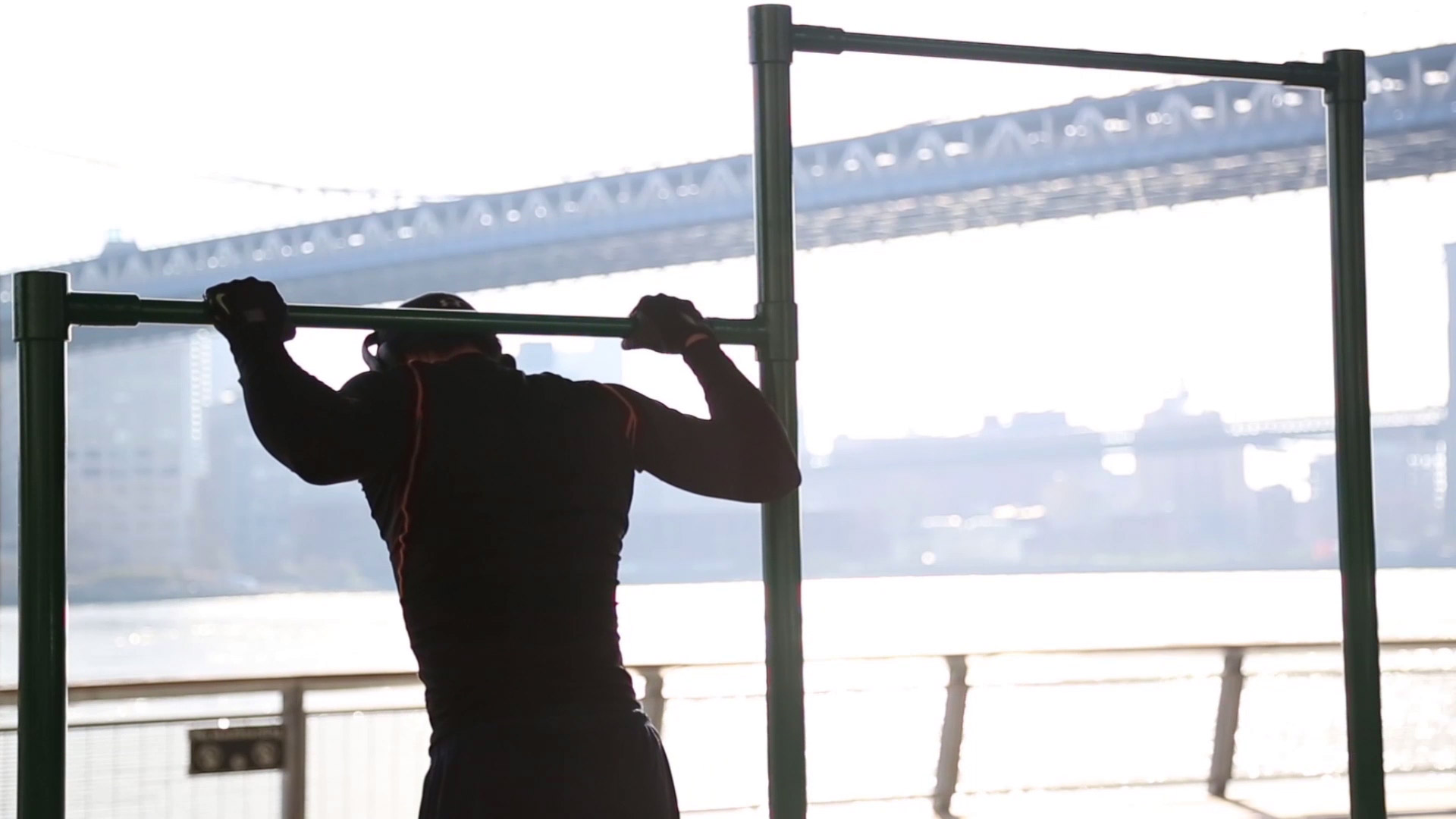 A Bigger Picture and Maintenance Issues

The outdoor fitness area in East River Waterfront Esplanade (ERWE) is crowded on a warm winter day. Many people are exercising on the free fitness equipment located at the southeast end of Manhattan, below Chinatown. But among the 12 pieces, two are left alone, broken. They’ve been wrapped up by yellow caution ribbons since early November. 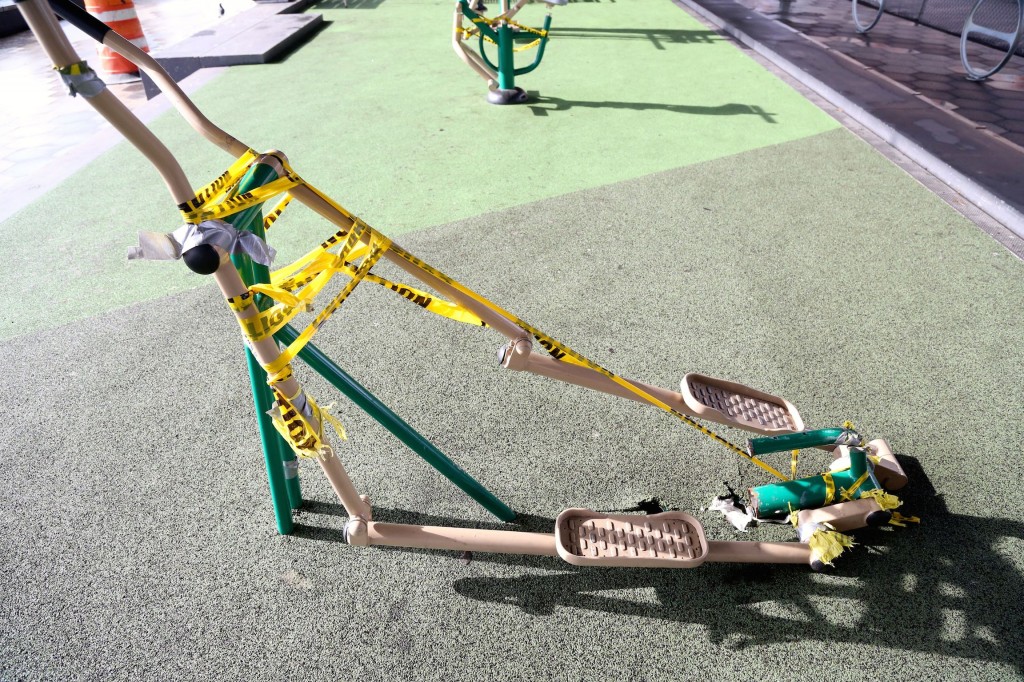 “It usually takes time for [the Department of Parks and Recreation] to fix the equipment,” said Fred Druck, a playground designer from GameTime, the company that created the equipment. “We sent them two new pieces for replacement three to four weeks ago but when they replace it? Who knows,”said Druck. “It’s not easy. It takes two to three people to work a day or two to fix it.” Druck explained that the situation is fairly common due to the Department’s lack of “budget, people and knowledge” to maintain equipment timely and properly.

Maintenance has been a problem haunting NYC parks for a long time, resulting partially from a tight budget. To address the problem, the new administration has recently released a new project called Community Park Initiative (CPI) along with other specific investments to increase maintenance capacity of the Department of Parks and Recreation. While fitness equipment might require more money and human resources to maintain, it’s very cost-effective in terms of promoting active living, making it a smart move for the City. 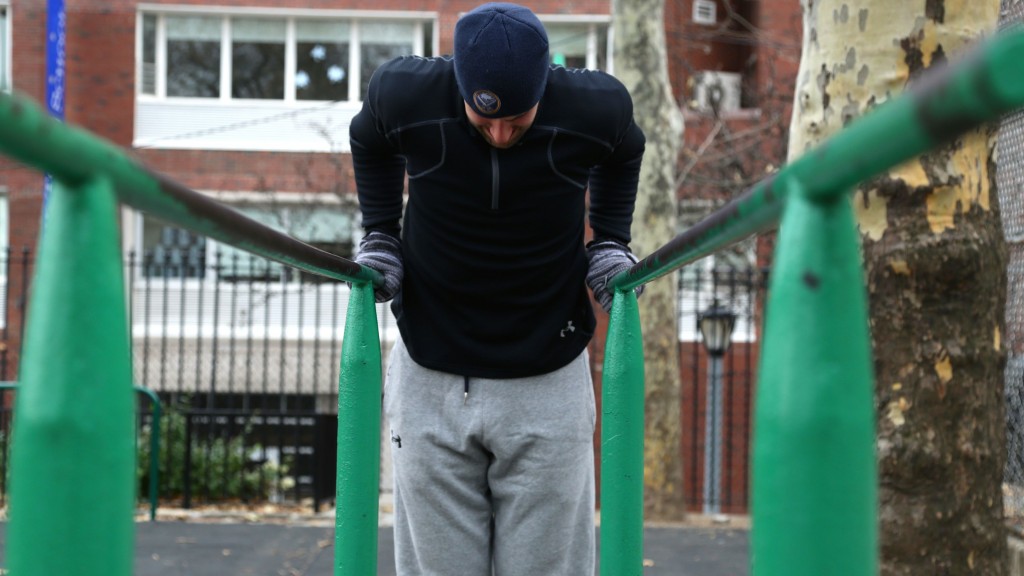 Maintenance issues seem to entangle parks from a very early stage. ERWE is less than one-year old, but its fitness area has already seen signs of destruction. On one hand, construction workers are still finishing up the landscape, decorating lights on the ground, while the paint is fading on some equipment due to intensive usage; the water fountain is not working; and there are scratches on the edge of steps – evidence of damage brought by prohibited skateboarding.

And ERWE is not alone. “Maintenance is a big issue in every park,” said Alec Appelbaum, Communications Coordinator of New Yorkers for Parks (NY4P), an independent research and advocacy organization. In 2012, NY4P launched their latest evaluation report on large parks in NYC, concluding,

“The Parks Department simply hasn’t had sufficient resources to keep up with the maintenance demands of 29,000 acres of parkland.” 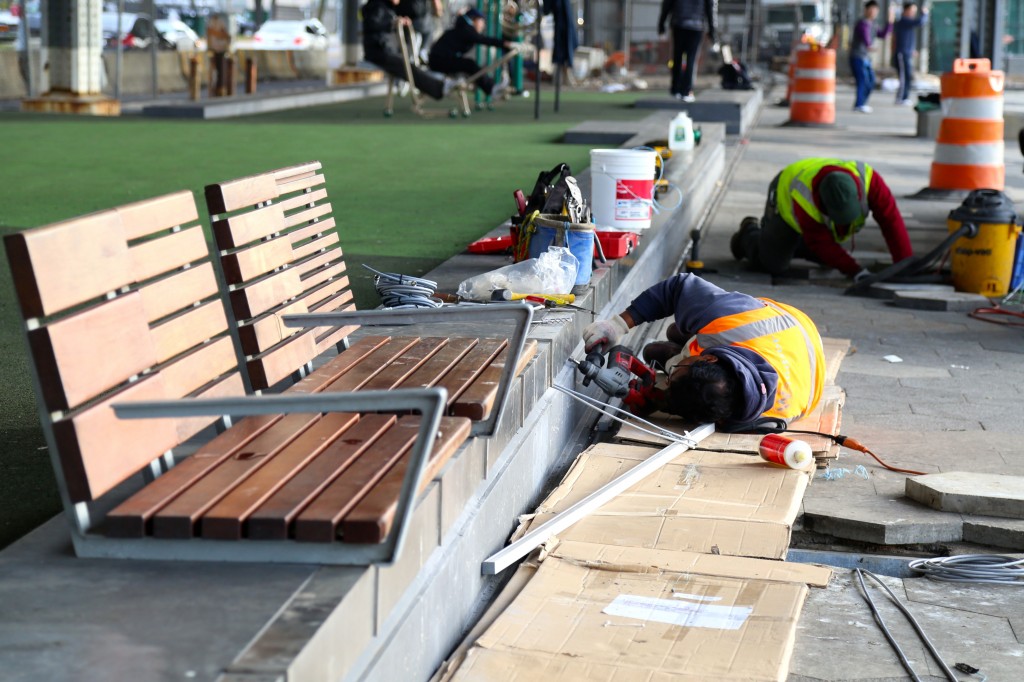 As part of the park system, outdoor fitness equipment is not immune to the maintenance problem. Blogger Mark Karten created a project called Park Fit NYC to put together a map of all outdoor fitness equipment in NYC parks, with photos and brief accounts describing some sites in particular. Although Karten bets “that most of the equipment is in good shape”, his documentation shows that some equipment is in poor condition. For example, the equipment in East River Park in Lower Manhattan is close to 30 years old and hardly used or upgraded. In John Jay Park, along the FDR drive in the 70s, there are two pieces of parallel bars installed the wrong way – rendering them useless.

“I happen to like what the city has to offer, but of course I would add a few things if they gave me my dream budget,” said Karten. 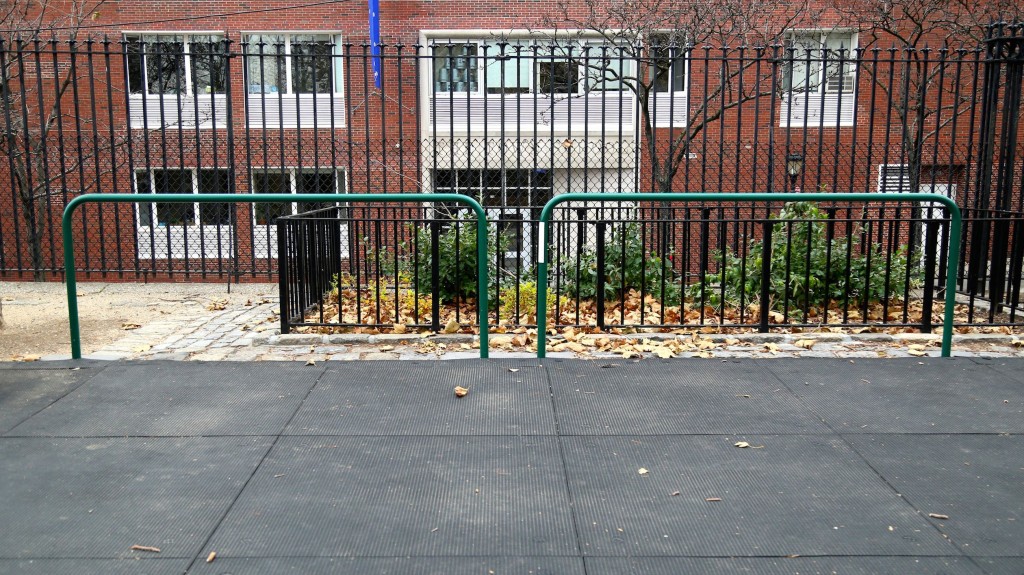 Creating these situations is a lack of funding for maintenance and personnel. According to a statement by Council Member Mark Levine at the Council’s park equity hearing in April, the parks spending has been taking up only a tiny portion of the city’s total budget since the 1970s. Even during Bloomberg’s administration when parks were highly prioritized, the Parks Department’s operating budget was approximated only about 0.5 percent. In terms of personnel, the Department has less than six full-time employees per 10,000 city residents, ranking 41st out of the 52 cities in America, according to the 2014 City Park Facts released in February by Trust for Public Land, a national non-profit organization.

Besides the tight budget, it’s necessary to acknowledge that the shortage of park maintenance workers also has to do with the nature of the job. “The Park Department acts in good faith, does the best they can but the positions for maintenance are often seasonal rather than professional,” said Appelbaum from New Yorkers for Parks. 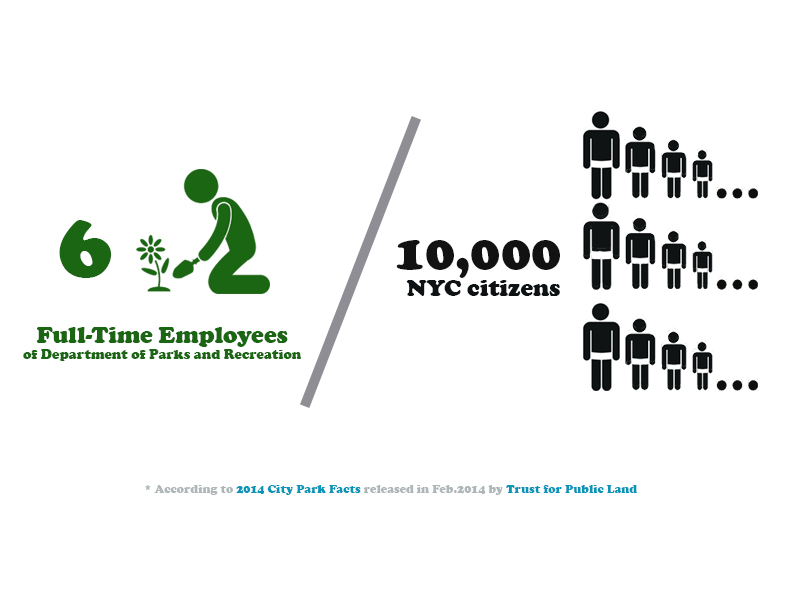 However, while tending to green space might be a seasonal job, taking care of the fitness equipment seems different. Although most equipment is designed for outdoor uses and relatively more durable, they still require constant inspection and care. For example, as listed on the website of Outdoor-Fitness, a major U.S. company of outdoor fitness equipment, maintenance like waxing the surface, proper positioning is necessary “for the equipment’s optimal function and resiliency”. Such maintenance requirements lead to a larger demand in budget and staff.

Despite the historical reality of a shortage of funding, there have been many new moves to increase public spending into park maintenance and renovation. This past June, Mayor Bill de Blasio and the City Council allocated $16.25 million to the Parks Department’s budget, including $8.75 million for 200 full-time maintenance workers and gardeners. The city also launched the $130 million Community Park Initiative (CPI) in Oct., including $4.2 million to increase city park worker and gardener hires in CPI Zones – densely populated but less-developed neighborhoods, where 35 small parks in dire need of improvement will be renovated.

The CPI investment means a lot to residents from those neighborhoods. “We have a lot of empty spaces here. It’s great if the government can install some equipment here and make it better,” said Walloper Jeil, a resident near Ranaqua Park in the Bronx, one of the 35 parks included in CPI. “Especially the playground, it is too old and too crowded in the summer,” said Jeil. 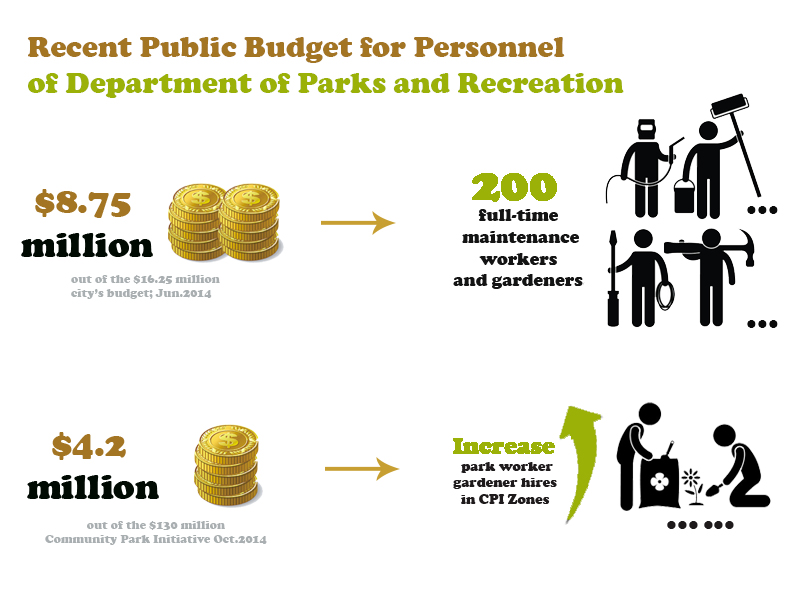 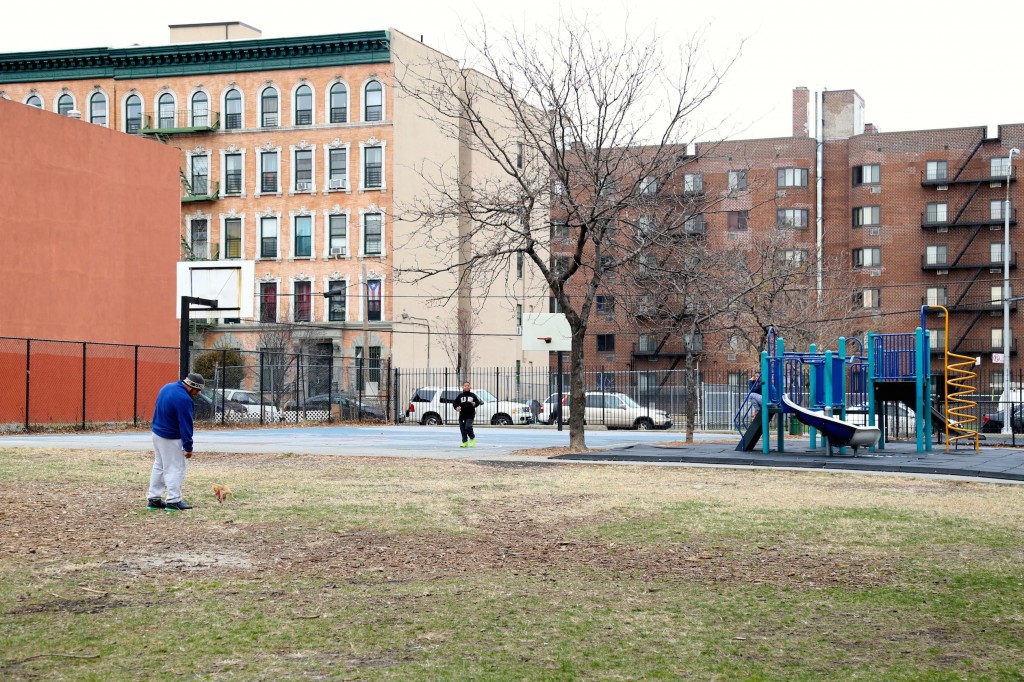 Despite difficulties in keeping up maintenance, the “experiment” of outdoor fitness equipment is expanding in NYC. The city opened the first comprehensive outdoor fitness center, also called an adult playground in Macomb Dam Park in the Bronx in 2012. Now there are 21 outdoor gyms installed like that and according to the Department of Parks and Recreation, there are plans for 25 more.