Bill de Blasio’s promise to have school days off on major Muslim holidays marks the efforts of rising Muslim political involvement, and communities such as Astoria restores hope crashed by the Bloomberg administration.

Because the newly elected New York City mayor has been a more friendly ear to the demands of religious and ethnic groups than his predecessor, Muslims are now hoping that Eid al-Fitr, the end of Ramadan, and Eid al-Adha, the celebration of sacrifice, will finally be officially added to the public school calendars. The community’s requests had not gotten any traction with Mayor Michael Bloomberg.

“The first press conference came up seven years ago right here in front of the mosque and it was my daughter protesting,” said Ahmed Jamil, Muslim American Society (MAS) outreach director in Astoria, Queens.

A mandatory ELA and math statewide tests for third to fifth grades was scheduled during Eid al-Adha in 2006. Many Muslim students, like Jamil’s daughter, chose not to attend the exams with the support of their parents and local organizations such as MAS. Similarly the specialized high school admissions test has been scheduled right after the Muslim celebration causing conflicts.

“How could you give a very important test on a religious holiday? People have to choose between education or family and religion. It was very hard,” said Jamil. “So we started the campaign and had 83 organizations to protest against the Department of Education.”

Jamil said they brought a resolution to the City Council of New York and received votes 50-1 in favor of adding the Eid holidays, but Bloomberg refused to sign it into law. That was during New York City’s mayoral election year of 2009. Bloomberg explained that it was to ensure kids are getting more education not less, which would be a result of having school days off for religious holidays in a diverse city like New York.

According to the NYC Department of Education 2013-2014 School Year Calendar, public schools are closed for two Jewish holidays, Rosh Hashanah (the Jewish New Year) and Passover; and three Christian holidays, Good Friday, Easter, and Christmas. Supporters in Astoria say adding Eid al-Fitr and Eid al-Adha to the existing 13 holidays per school year is not likely to compromise the minimum of 180 school days that the State Education Department requires. They say the two Muslim holidays run according to the lunar calendar and are very likely to fall on weekends or existing school holidays.

The MAS, which runs out of Masjid Dar Al-Dawah in Astoria, responded by encouraging its members to be more politically active. They collaborated to speak out for Muslim kids that comprise 13 percent of the entire public school enrollment in New York City.

MAS leaders said the resolution being submitted to the City Council in 2009 and the current campaign are not restricted to the Muslim community. Other groups have raised their voices in the 2013 mayoral election for their own holidays such as the Chinese New Year and Indian Dawali to be recognized by the board of education.

“Being part of the larger community doesn’t mean you lose your identity,” added Jamil. “That’s the bigger challenge for any minorities, any religious communities, it doesn’t matter.”

According to Imam Abdulhalim at Masjid Dar Al-Dawah, leaders of the mosque communicated with mayoral candidates this year and received promises from both De Blasio and Lhota on recognizing Muslim holidays. MAS also organized voter registration workshops, seminars and other events.

In the meantime, numbers of politically involved Muslims increased citywide featuring organizations such as New York Muslim Voter and Information Club and the newly found Muslim Democratic Club as of earlier this year. They gained the attention from the media with the coverage of a Muslim rally for De Blasio in Brooklyn and from politicians opening supporting their demands.

“The community outreach was succeeded very much to have the largest registered Muslim voters for the mayor candidate in the history in New York City, this mayor candidate [De Blasio],” said Jamil.

The New York City Board of Election said they do not gather voters information on their religions. But the two Muslim clubs are working on finalizing the specific statistics on Muslim voters and expect to release the results soon. 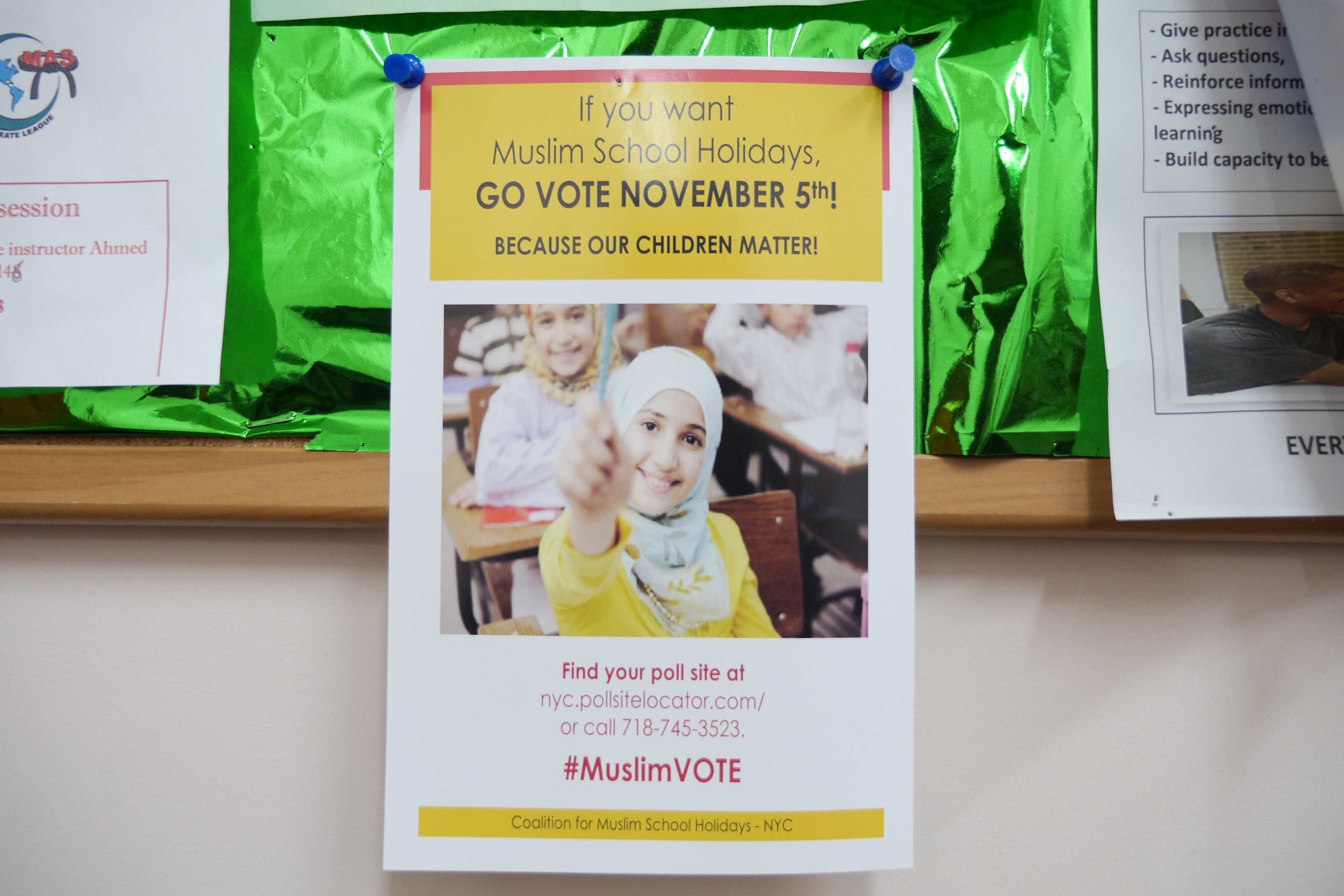 The Muslim community slowly came to the realization that participation in the political process would help raising their voices and gaining attention for issues that they had in mind.

“We want to show that the community has effects on voting,” said Moustafa Rahman, owner of an Egyptian restaurant called Mombar in Astoria. “When we don’t vote, they won’t know we exist and they won’t care about us. And they don’t come to ask what the city can do for you.” 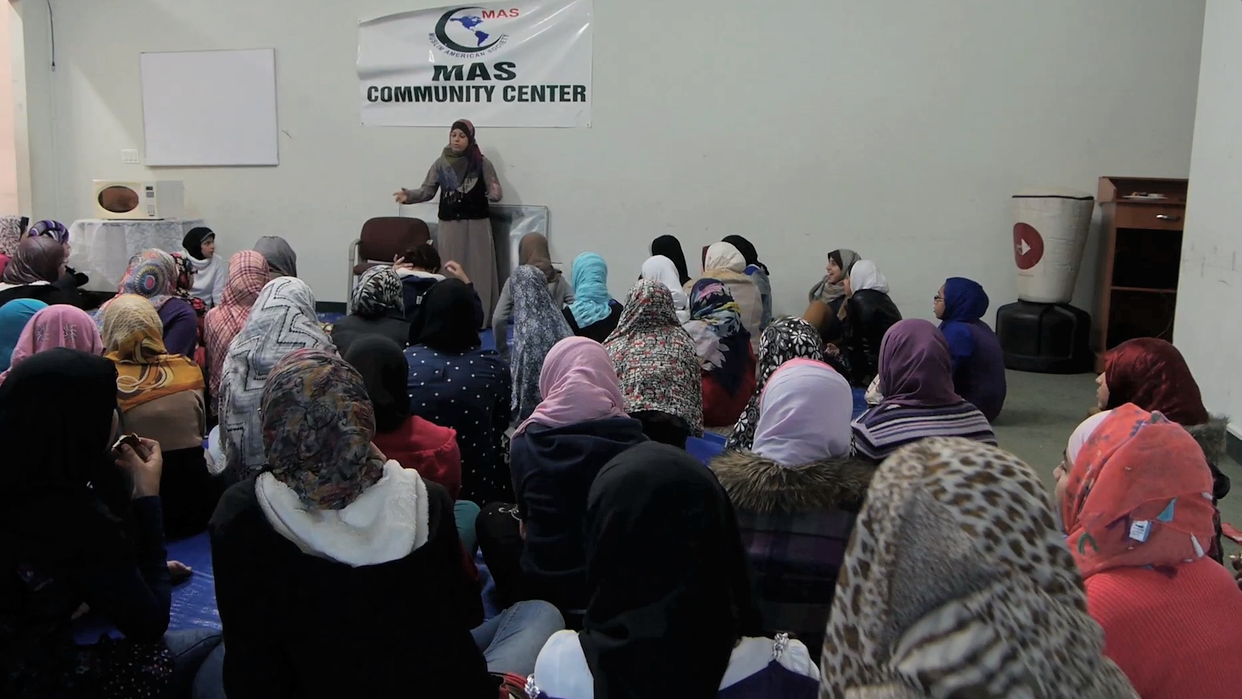 Members of MAS also aim to bridge between Muslims and the larger community to gain understanding and respect, especially for the kids.

“Some of them think this is something we shouldn’t talk about in the public school. We make them feel more confident with their Muslim identity,” said Sama Sobih, assistant principle of MAS youth program in Astoria. “No problem to be Americans but in the same time, to have a religion is not wrong. We try to let them see themselves as both.”

In Astoria there are signs that the local public schools are becoming more aware of their muslim student body even if changes still need to be done at the system wide level.

“They actually announced on the speaker right before the holiday that ‘tomorrow most of our Muslim kids are not going to be here because they are celebrating a holiday,’” said Farouk Rahman, the 11-year-old son of the Mombar restaurant owner. “But the next day, they sent my dad an email saying I’m one day absent. They don’t mark me absent when I’m sick though.”

The Muslim community are determined to push the proposal forward with hope and expectations for the new administration.

“To have this implemented, that’s our next step,” said Jamil. “Until it’s signed, it’s still a promise.”