Artists: Learn and Strive to Survive in the Golden Age of Bushwick

Misssing Bushwick— The Rheingold rezoning in Bushwick from Rongfei Guo on Vimeo.

Around 7:30 p.m. on Oct. 9, Launa Eddy, a sculptor and art teacher at 3rd Ward, a Bushwick-based art studio and educational work place, woke up to text messages and phone calls. “Hey, 3rd Ward closed! Come to get your stuff!” the messages read.

As a creative arts incubator, 3rd Ward marked the beginning of the burgeoning arts community in Bushwick. Since it opened in 2006, it has been a haven for budding artists like Eddy, with its studios, classes and activities like its weekly Drink and Draw in which artists got tipsy and drew nude models. Having no warning before that day, members of 3rd Ward received an email that officially announced the closure. 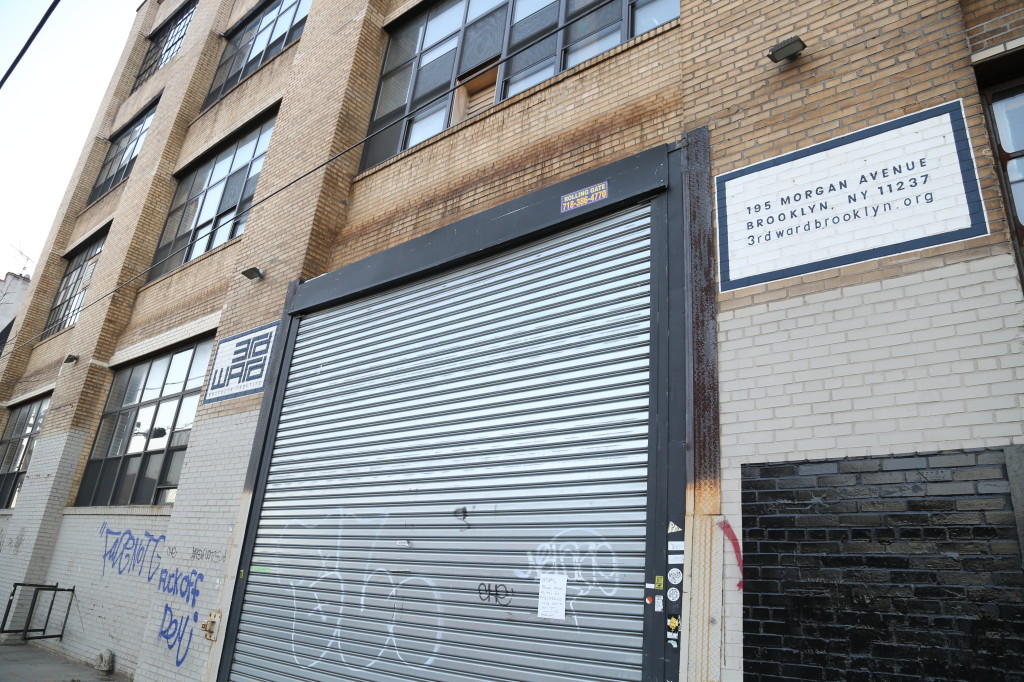 “Yet, with the costs of running and operating our space, we are sadly no longer able to remain in business,” the email reads.

Eddy rushed to 3rd Ward, located at 195 Morgan Avenue, only to see a swarm of teachers and artists coming to move their stuff out. Some shed tears.

“3rd Ward has been my community and my life for a long time. It still is. I have my friends there, people I work with, projects I am doing and the apartment I live in the neighborhood,” said Eddy.”It creates my life and my whole world.”

Still, Eddy admits that the closing was not a huge surprise. Over the past year some teachers did not get paid on time and the price for membership had doubled since it opened its doors to over $600 a month.

Robin Grearson, a former writing workshop teacher at 3rd Ward, said she decided to resign when the compensation policy changed in May.  The policy switched from paying teachers per hour to paying a commission per student. “Teachers were encouraged to become the sellers of the class to students,” said Grearson.

On Sept. 26, 3rd Ward co-founder Jason Goodman sent out a fundraising letter to all members, inviting them to make an investment as shareholders due to “a downtick in an important revenue stream”, referencing the membership. 3rd Ward also launched an investment campaign on Fundrise, a crowd-funding website for business development, aiming to raise $1.5 million. They only managed to get $375,000.

In recent years, Bushwick has become an art mecca due to its proximity to public transportation and affordable studios. Now, housing in the neighborhood is much more valuable. In August, House of Yes, another well-known art collective in Bushwick, closed its doors as it was unable to renew their lease when the landlord doubled their rent.

House of Yes co-founder, Anya Sapozhnikova, said, “We didn’t want to double our overhead without the ability to double our profit.”

Two months before that, an art space called Cre808 Studios also announced on its website that it would stop offering the studio at low prices, “due to the raise in property values in the neighborhood.”

On the night of 3rd Ward’s closing, Victoria Valencia, a 3rd Ward furniture designer asked Eddy to join her newly-founded group, Save 3rd Ward, whose goal is not to save the organization, but the artist community itself.

“We are not trying to bail Jason Goodman out or save 3rd Ward as the current entity.  We are organizing to keep our studios to create a cooperative movement, member-run,” Valencia wrote on the initiative’s website.

Eddy was in. The group of 12 artists started to look for a space to build a collective art studio.

Believing that the former industrial neighborhood is a canvas for artists, Eddy still wants the new workspace to be located in Bushwick. “I moved to Bushwick because of 3rd Ward,” said Eddy. After falling in love with the neighborhood, she’s decided to stay. Valencia said they have seen about five different places and are still looking for a space of about 10,000 square feet at an affordable price.

If they looked for studios just two years ago, they may have had better luck finding vacant and affordable spaces. Six blocks away from 3rd Ward, 56 Bogart, a five-story industrial manufacturing warehouse, has turned into an art hub. There, galleries on the ground floor welcome visitors all over the world and 90 artists’ studios present art pieces to the public. A sign hanging on the outside wall lists the 12 galleries at 56 Bogart. But two years ago, the older sign read, “Artist Work Lofts. Newly Renovated.” 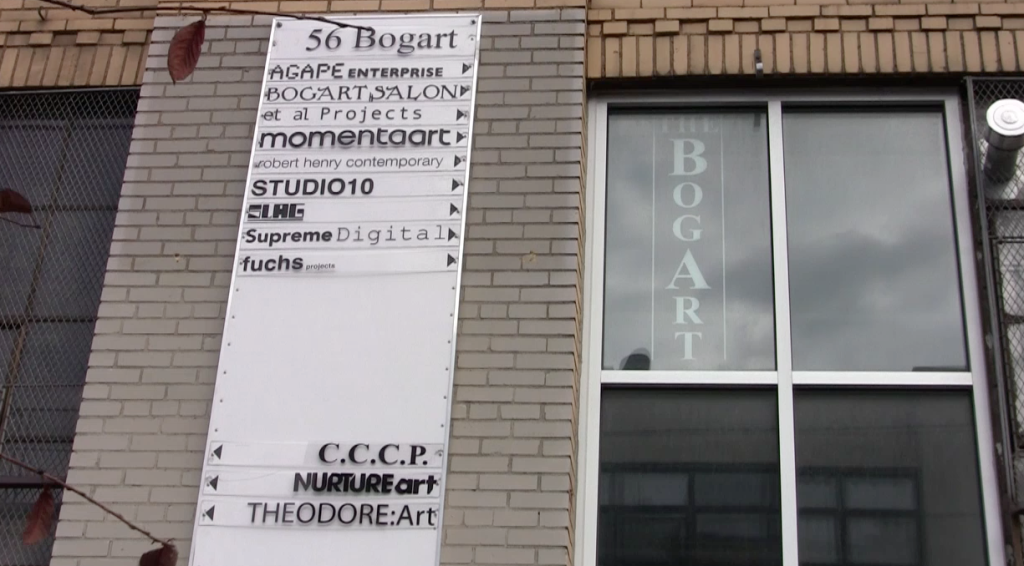 “There is a lot of demand right now,” said Ted Hovivian, the landlord of the building. “But the building is fully occupied. We get two to three phone calls everyday from artists looking for space but we just don’t have any.”

In spring 2011, a non-profit gallery called Momenta Art moved here from Williamsburg. Shortly thereafter, a group of gallery owners and artists, scrambled for spaces at 56 Bogart. Now, the ground floor is almost fully occupied by galleries. Even gallery owners from as far as California have contacted Hovivian in the hopes of renting a space in the building.

But for these newcomers, “there is always financial pressure,” said Robert Walden, Director of Robert Henry Contemporary gallery. He added that this pressure grew as the building was reappraised twice by the city in 2013, which led to an increase of $50,000 in property tax on the building. With the exception of those who have moved in within the past year, every tenant is responsible to pay for a portion of the increase.

For the two non-profit galleries NURTUREart and Momenta Art in 56 Bogart, the decreasing funds from the government and foundations is another problem. According to a recent financial report of the fiscal year ending August 1, 2012, the total amount of contributions, gifts, grants and similar amounts received was $126,468. This is a 22 percent decrease from the previous year, the first year NURTUREart moved in. Louise Barry, the Development Director at NURTUREart, said they also had a decrease of $10,000 in city funding in the 2013 fiscal year.

Less money drove the non-profit gallery to try more funding projects. This year, the gallery applied for one more category of funding from the New York State Council on the Arts to make up for the decline in funds from the city.

Hovivian is optimistic and believes that the golden age of Bushwick has come. Deborah Brown, an artist and board member of NURTUREart, said currently Bushwick is “the most desirable place for artists in America.” She noted, however,  that in the long run, artists might be inevitably priced out. “Everyone wants to get a piece in Bushwick. Bushwick is a hot place now. There are people from all over the world saying ‘I want a studio here’,” said Brown, adding that she just showed an artist from China, eager to get into Bushwick, a well-known gallery in the neighborhood.

But both Hovivian and Brown admit that most artists in Bushwick are young and relatively unestablished in the art world. They may be easily priced out by more prominent artists coming to Bushwick from all over the world.

When Eddy was priced out from Williamsburg to Bushwick, she had been crashing in her studio on the fourth floor of  3rd Ward for two months before she found an apartment. Now, the apartment is cluttered with all of her art supplies and materials from her old 3rd Ward studio, and she hopes to find a new art studio as soon as possible. But for Eddy and her group, Save 3rd Ward, looking for space is only the first step.

“One of the biggest problems here is that we are more artists than business people,” said Valencia. She is still thinking of a strategy for a membership-based business plan to help Save 3rd Ward earn a profit. Ultimately, the art collective wants to save their community, and their livelihood.