Brooklyn, NY– New York City has the highest rate of public transportation use of any American city. The city would come to a halt if public transportation were not to function as it did in the aftermath of hurricane Sandy. For tourists riding one of the oldest subway systems in North America is a highlight of their trip. About 15 million people use MTA in New York and its surrounding counties for various reasons. Recent economic development in the outer boroughs of Brooklyn, Queens, the Bronx and Staten Island have given an impetus to many industries and created jobs. As inter-borough commuting pattern increased, the transportation system couldn’t keep pace with the corresponding development.

Sandra Martin, 53, works as a home health aide and lives in Brownsville area of Brooklyn. She works for Senior Bridge an agency that provides home health aides to various clients across the city. She travels to Queens for work six times a week. While her schedule varies depending on her workflow for the week, her commute is fraught with hurdles. She catches the B12 from East New York Avenue in Brooklyn to Alabama Avenue and then boards the B20 to Myrtle Avenue. She then waits there for thirty minutes for the bus Q55, which takes her to 85th street in Queens. The main challenge that Martin has to deal with is that the bus service becomes sporadic on the weekends. If the busses don’t come in time she has to do part of commute by cab. “Sometimes they [agency] pays you for travel and sometimes they don’t, depending on who is working that day,” says Martin. The cab costs her $15 per ride in addition to her metro card fare. A health home aide gets somewhere between $8-$10 per hour on average. “Every week I pay $30 for the Metro card. I spend over $300 [in a month] on my transportation,” states Martin. She travels for an hour and a half on an average to reach her client’s house. 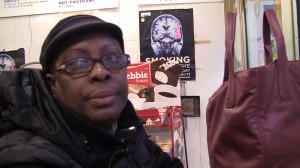 Martin’s story is one of many commuters who travel from one outer borough to the other. Many of them have to transfer multiple times to get to their workplace and commute for at least an hour or more. “I live in Bedford-Stuyvesant and to get here [Brownsville] I either need to take a shuttle to the 3 or the A to a bus,” says Cate Prefontaine, an educator who commutes to Brownsville for work. “So no matter what, I have to transfer and even though it’s like two and a half miles away, it takes like 40 minutes,” adds Prefontaine.

Many who travel between the outer-boroughs complain that they have to go into Manhattan as part of the trip. Some who live in Queens for example have to go all the way into Manhattan to get to Brownsville in Brooklyn. There is only one option when it comes to traveling between Queens and Brooklyn which is the G train. “Anything north to south will be helpful. Everything in Brooklyn is east to west except for the G but let’s not even go there,” add Prefontaine and her colleagues collectively.

Boroughs like Brooklyn, Queens and the Bronx have especially seen a growth in economic development, leading to more jobs and houses in the area. According to a 2011 report by the Center for an Urban Future the bulk of the city’s jobs are now being created in the boroughs. Between the period of 2000 and 2009, Brooklyn added approximately 35000 jobs, Bronx added approximately 16000 jobs, Queens has seen an increase of approximately 11,000 jobs and Staten Island contributes approximately 4000 jobs. The report further states that commuter growth among the residents traveling to adjacent counties is 27 percent in Brooklyn, 38 percent in the Bronx, 22 percent in Staten Island and 13 percent in Queens between 2000-2009.

Many residents rely on public transportation but many complain of the erratic services and unprecedented delays. “My commute is usually an hour and a half from East New York to Crown Heights,” says Gayena Anderson, a high school student. “The reason for that is the buses don’t come as frequently as they should and when they do come they are crowded so we have to spend a lot of time at the bus stops, unloading and loading all the passengers and it’s really tiresome because I have to get up really early in the morning in order to get to school on time. I’ll be at the bus stop waiting for so long for the bus and by the time the bus comes I am already late for school and it’s not my fault but I can’t tell my teacher that it’s not my fault.” 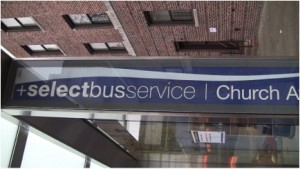 After hearing the clamor from the community and after various meetings with multiple organizations, the Metropolitan Transit Authority (MTA) and Department of Transportation (DoT) have recently introduced the Select Bus Service under the Bus Rapid Transit (BRT) along the route of B44 in Brooklyn for the first time. This is an express bus service described as a “subway aboveground”. Under this new service buses have dedicated bus lanes starting from 7 am to 7pm throughout the work week and no cars or other private vehicles are allowed to park or enter these lanes. This service was implemented on November 17th, 2013. The project took five years of planning and executing. “What has happened is that there has been a construction of several bus stops along the route and introducing the means of being able to purchase your ticket or pay your fare from the sidewalk from where you would then obtain a receipt to which you must hold onto until you get to the end of your trip,” says Lee Burnett, Chairperson, Transportation Committee, Community Board 17. 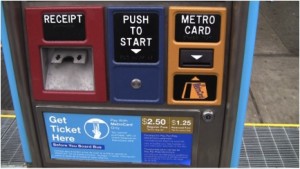 “B44 route is the longest route in Brooklyn measuring 9.3 miles and the most travelled by passengers. It transits up to 41,000 riders every day,” says Cate Contino, Straphangers Campaign Coordinator, which is a part of the New York Public Interest research Group and has been actively involved in advocating for transportation overhauls throughout New York City. The new service covers a massive chunk of Brooklyn starting right from Williamsburg bridge plaza down to Emmons Avenue toward Sheepshead Bay. The new service has cut the commute time of many people by half. “Usually it would take me 40 minutes from the [Flatbush] junction to the Fulton Street where I get off to go to work but with this service it’s cutting it into half- 20 minutes. [It took] 17 minutes one morning just to get from here [Flatbush] to Fulton Street. It is amazing. I am so glad because I get to work so early,” said an excited Pamela Caton, who works for the Department of Education.

However, many merchants along the Nostrand Avenue in Brooklyn have been protesting against this service. They say that due to the ‘no parking’ rule their customer base has reduced as people can no longer disembark from their cars and shop along the Avenue. “A lot of people are trying to run in and run out.They are given tickets, so they come in a hurry or don’t stop at all because there is no parking,” says Izan Pierre owner, Onez Cleaners.

Lindiwe Kamau, President, Nostrand Avenue Merchants Association, worked very closely with the MTA to convey the merchants’ concerns. After several meetings the efficacy of this new service would benefit the community at large and hence Kamau decided to adopt a positive approach toward the service. “People are coming from different areas and this is what we have asked all the merchants that now basically this is what you have to accept what’s already here but do the best that you can to make your businesses as visible as possible.”

The MTA has done a study and plans to revamp another 16 corridors as part of the BRT. When asked to comment on the current situation of the Select Bus Service in Brooklyn, the MTA did not respond in spite of repeated attempts.

Jeff Zupan, a senior fellow of Transportation at the Regional Plan Association, which is America’s oldest independent urban research and advocacy organization, has come up with a plan that he says could aid the commuters across the boroughs and reduce transfers to get to their destination. He calls it the Triboro Rx that proposes to build an alternate rail line connecting neighborhoods that don’t have easy access to the buses and subways.  “It really connects with just one transfer either a subway or a bus transfer more than half of the neighborhoods in the city of New York to the other half of the neighborhoods in the city of New York and really can do a great deal to increase the mobility in the city. It’s a line that is circumferential rather than radio and unlike the subway system, which is focused on bringing people into Manhattan, this is focused on connecting the so called outer boroughs,” says Mr. Zupan.

Going by the example of the Second Avenue subway line, it seems a bit far fetched but when asked Mr. Zupan said, “We haven’t made a formal estimate of the cost but I think certainly it is much less than any new subway line and because it’s a separate ride away you don’t have to deal with traffic as you have to with bus service. One of the difficulties that the SBS system has today is that many neighborhoods don’t want that bus line because it’s going to take away a parking lane, taking away a traffic lane. This doesn’t take away any of the lanes.”

Sandra is still waiting for a new change to take place to ease her daily commute and lower her traveling expenditure. “Well the cab is $15 I pay on a Saturday and that is $15 I could have had to buy lunch or something else if the buses came on time.”