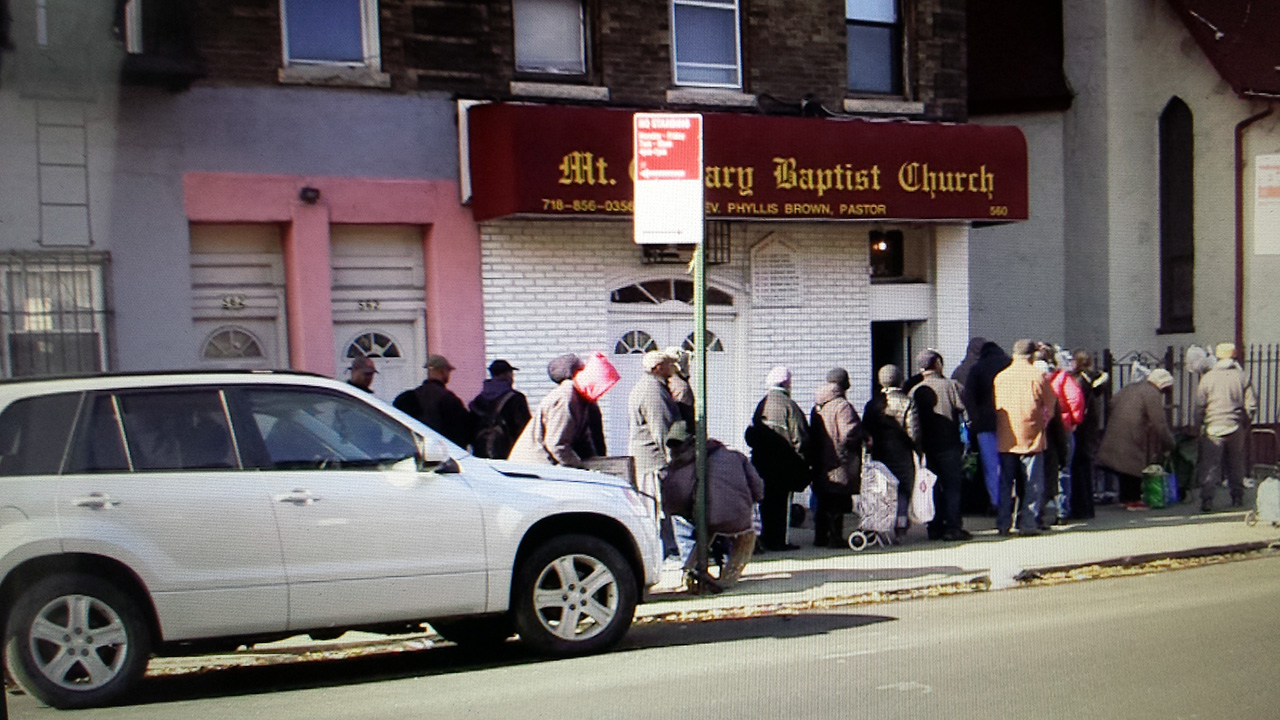 As early as 8.00 a.m. the Saturday before Thanksgiving, several dozen people were already waiting in a long line outside the Mount Calvary Baptist Church on Rogers Avenue in East Flatbush. As one of New York City’s estimated 500 food pantries and soup kitchens that serve fresh food and hot meals to low income residents, the church has helped feed the hungry in the neighborhood for nearly 30 years. By noon, members of the church were struggling to control the crowd at the entrance, as anxious people banged on the door outside trying to get in.

“There has been an increase in the number of people coming here in the past few weeks,” said Rev. Phyllis Brown, founder of the church who also runs the food pantry. “They walk off the street, they come, we sign their names and we give them food. Like two hundred and more on a Saturday, but this is becoming too much.”

The rush comes after the $5 billion temporary boost given to the Federal Supplemental Nutrition Assistance Program (SNAP), formerly known as food stamps, expired on November 1, 2013. Emergency aid agencies say it has translated to automatic cuts in benefits to over 1.8 million people in New York City alone.

In its annual report released at a legislative breakfast meeting with coalition partners in Manhattan in late November, the Food Bank for New York City  disclosed that the sweeping cuts to SNAP benefits will result in the estimated loss of 76 million meals for New York City residents in its first year. A household of three is losing, on average, $29 per month in SNAP benefits, which is equivalent to 20 meals.

“The extent and the depth of these cuts are actually greater than the total amount of food that Food Bank for New York City distributes in a year,” said Triada Stampas, Senior Director of Government Relations at the organization. The organization is the main source of food for food pantries and soup kitchens across the city.

Some Food Bank for NYC volunteers, like Rev. Brown, are already feeling the pressure, as anxiety has begun to set in. Her Flatbush community has thousands of residents who are on SNAP and several hundreds visit her center every weekend to get food supplies.

“Please give me chicken, please, please,” cried a middle-aged woman, who preferred not to be identified by the press, as she pleaded with staff during the distribution on a Saturday last November. But there was none for that day, so she turned away in disappointment, clutching her plastic bag stuffed with vegetables, beans and some potatoes.

An elderly man who was waiting patiently in the line outside the church said he hoped he would get turkey for his family for Thanksgiving, but to his surprise, there was none available.

Rev. Brown said the church had received some supplies of chicken, turkey and pumpkins in the previous weeks but those quickly ran out because of the large influx of people who came for food. 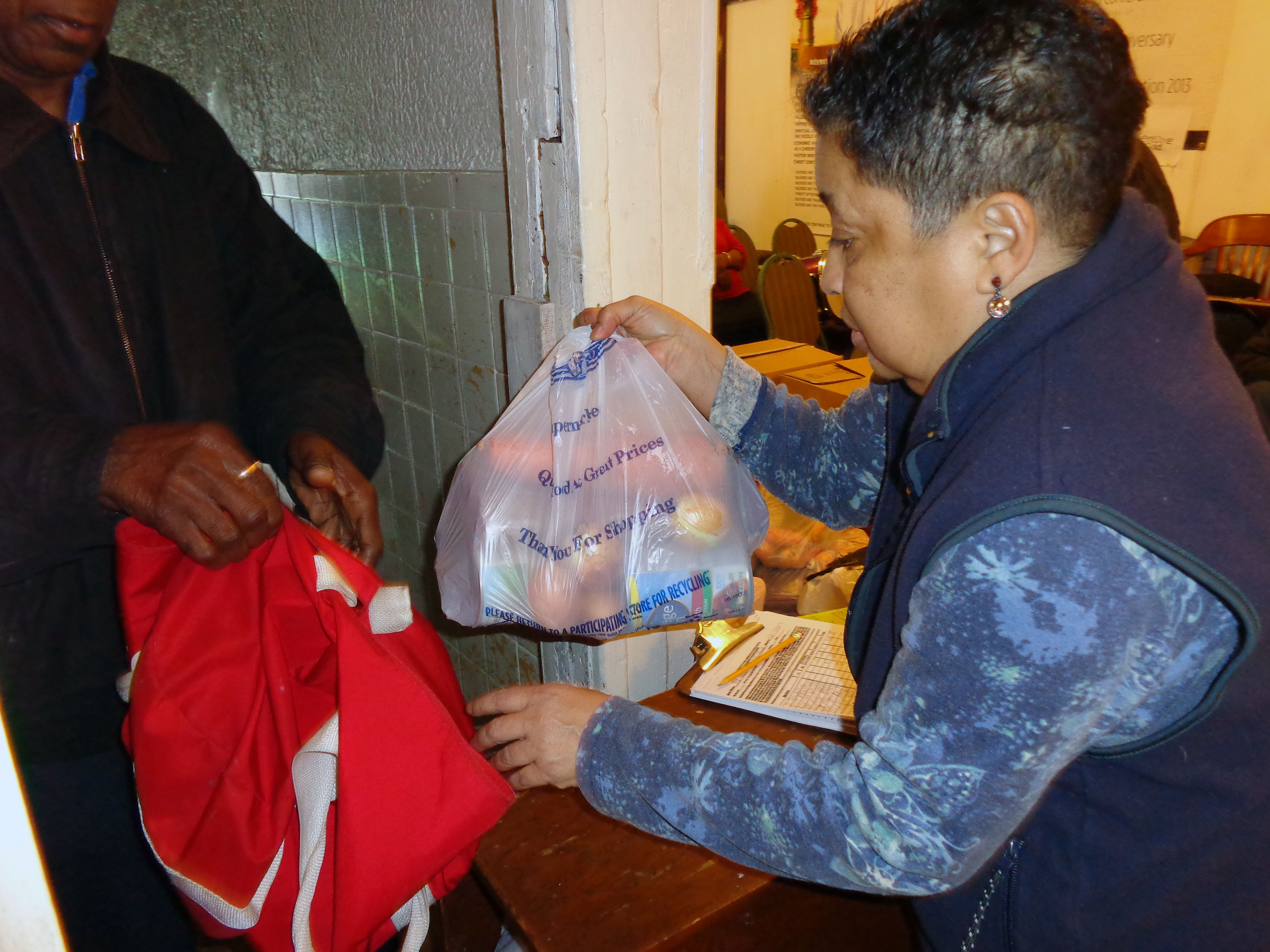 “We are trying to make do, but it’s really not enough,” said Pierson Samuels, pointing to the food he had just received from the pantry. Currently unemployed and looking for work, he has only managed to get occasional construction jobs in the past few years. Pierson is worried that the SNAP benefits cut will greatly affect is family of four.“I don’t think they should be making any cuts right now. You know, there are no jobs for people, the children leave college and can’t get any job; even the young ones, they depend on their parents.”

Brooklyn accounts for more than 37 percent of the estimated 1.8 million New Yorkers who receive SNAP assistance. Over 37,000 of those are in East Flatbush, one of the highest figures in the borough. The neighborhood has the largest Caribbean and Haitian immigrant populations in the US, many of whom are currently experiencing difficult economic conditions. Unemployment in the community sits at over 12 percent, compared to 9.0 percent for New York City and the national average of 7.9 percent.

Community leaders in East Flatbush are worried about the potential impact the cutback will have on their constituents. “Many people here rely on the SNAP to improve the quality life of their children and keep them healthy because they don’t have the jobs that pay adequate wages,” said Dr. Gail Reed-Barnett, chairperson of Brooklyn Community Board 17. Reed-Barnett stressed how the impact of the cuts will have far-reaching consequences for families than imagined. “A child that eats breakfast in the morning is a child that’s going to learn throughout the day. The children need nourishment in order to be able to succeed in school.”

But apart from expressing concerns, local officials seem almost powerless in terms of finding an alternative way of addressing the problem. According to Dr. Reed-Barnett, the community board is writing letters and sending petitions signed by their constituents to elected officials, hoping to spur awareness that people are at risk of not being able to feed their families.

“We have to continue the fight,” says Reed-Barnet. “We have to continue talking to people in congress, the politicians, because they are the ones that make the decisions. We are the richest country in the world so we should be able to provide for the vulnerable members in our communities.”

New York State Senator Kevin Parker is also leading a campaign to lobby congress to restore funding to SNAP and pass legislation that will create strong middle-class jobs. “When you look at the numbers, we are talking about 80 percent of mostly women and children and one in five seniors or elderly people who are affected,” said Brian Cunningham, an aide to Parker. “House and Senate Republicans have decided to make these cuts at a time when the cost of living is rising even for hardworking families.” Cunningham also said that the minimum wage for New York City is still $7.25. With such a wage, a job at forty hours a week would not earn a resident in East Flatbush enough money to pay a rent on an average apartment and be able to sustain a family of five for the month. “Congress obviously needs to re-examine the issue in the near future and get their acts together,” Cunningham concluded.

The  Food Bank for New York City prepared a five-point transition plan for the new Mayor on how to end hunger in the city. The proposal aims to “strengthen, streamline and simplify SNAP.” Bill de Blasio’s administration is already actively confronting various pressing issues since taking up office at the beginning of 2014, but restoring SNAP benefits remains unlikely until the debate gets back to Washington, where partisanship has been the major obstacle in progressing on many critical issues.

The Food Bank for New York City and its partners hold the strong view that pulling New York City back from the edge of the “Hunger Cliff” will take close coordination between federal, state and local government, as well as meaningful partnerships between government and non-profit service providers and advocates.