A New Future for W.125St, But Local Small Businesses Are Not Included 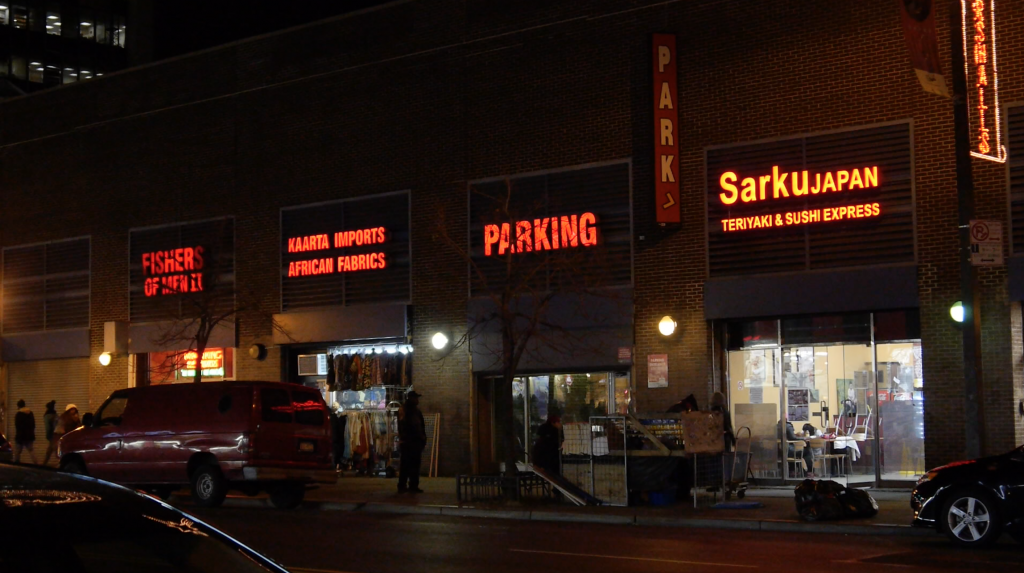 Located at 121 W125th St, four local mom-and-pop stores will be displaced by an upcoming project.

New York – It was only a matter of time, after the 125th Street Zoning Proposal was approved by the state five years ago, that an influx of big, national retailers like Old Navy, Starbucks, and Marshalls would come to Harlem and begin to push out the local mom-and-pop stores. Now, the last four local small businesses located at the zoning proposal’s core section between Adam Clayton Powell Blvd. and Lennox Ave., will be displaced by a landmark project that has been recently approved by the Public Authorities Control Board.

Additionally, according to the National Urban League’s General Project Plan proposal, the 466,000-square-foot building will be Harlem’s largest mixed-use development and include the state’s first civil rights museum, a conference center, affordable housing, a 225-space parking garage, and 114 retail units for budget shoppers. The project is also expected to produce thousands of temporary construction, and permanent, jobs.

“This is going to be a great change for Harlem,” said Mike Street, a Harlem-based digital strategist, who supports this plan.

However, critics charge that the new vision is being built on the backs of the longstanding business owners who built their livelihoods on the once-seedy strip. Some residents are fearful that it will bring more gentrification to the neighborhood. 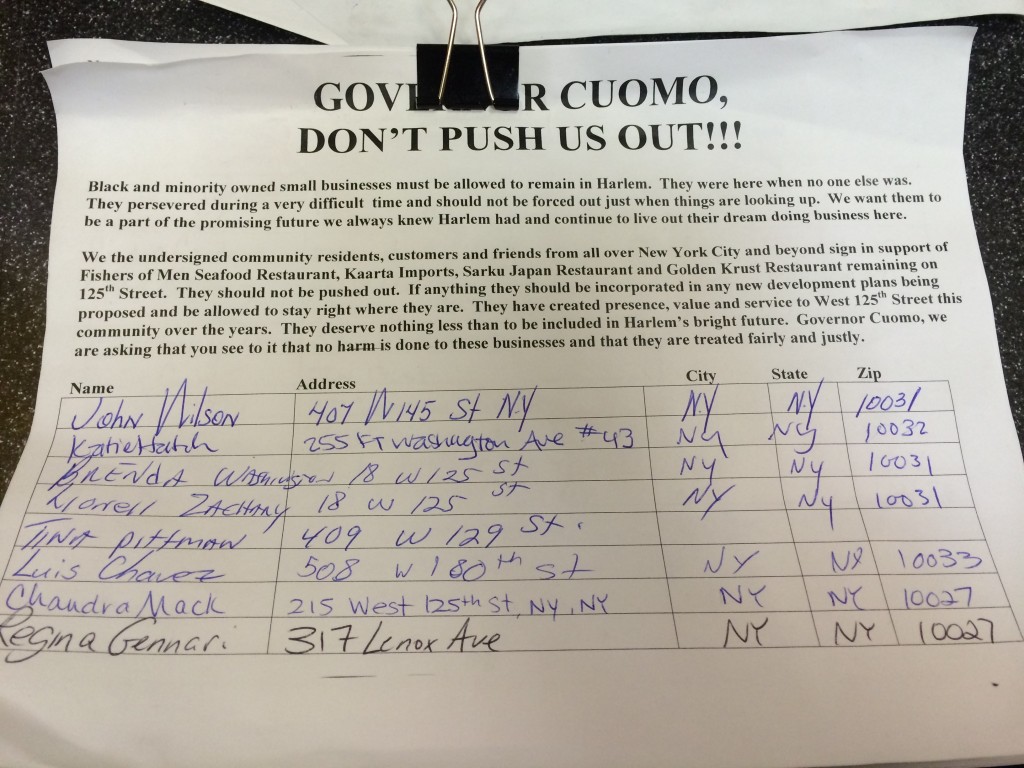 This petition chart has been put on the order desk of Sarku Japan restaurant three weeks ago.

Tounkara Massamakam set up his African fabric shop, Kaarta Imports, at 121 W. 125th Street 20 years ago. “At that time, nobody wanted this place,” said Massamakam. “When I signed the contract, some friends of my said that I lost my mind. But I said, ‘Let me try, you never know’.”

About four years later, Rolston Waltin opened Golden Krust, a Caribbean chain restaurant in the city. Then, more and more local small businesses gathered on the main commercial street of this black community.

Among the newer wave was Joseph “Joe Fish” Benbow, who came to Harlem to build his future. “Coming to and getting on 125th Street is really a big thing. It’s like you made it to the top,” said Benbow, the manager of Fishers of Men II, which opened six years ago after a long time searching for a location. “To have such a small business and to be graced with the opportunity to make it on that big strip [of 125th Street], and then to be here for six years and going,” said Benbow, “we naturally assumed that, ‘Wow things are looking great, the future will be good’.”

However, Benbow would never have anticipated that just six years later, he would have to think about his relocation. Like Benbow’s Fishers of Men II, Kaarta Imports, Golden Krust and a restaurant called Sarku Japan are facing the problem of forced relocation.

The first details of this upcoming project were announced by Governor Andrew M. Cuomo and Mayor Michael R. Bloomberg in February 2013. In July, the landlord of this building, the New York State Urban Development Corporation, held the first public hearing. But none of the four business owners were aware about it until October 2013.

“I was not told by the city, or the state, or the National Urban League. I was informed by Senator Bill Perkins’ office,” said Raj Whadwa, the owner of Sarku Japan restaurant that only opened less than a year before the announcement was made. “That was a shock to us.”

According to the Essential Terms of the Proposed Lease, existing tenancies expired on or before August 2015. However, four business owners were informed that the project would break ground in January 2015. The Empire State Development (ESD) explained that on the lease commencement date, they would transfer any leases or license agreements still in effect at that time. However, according to Whadwa, whose lease doesn’t expire until January 2015, the ESD hasn’t offer a specific solution.

The four business owners have been offered $250,000 low-interest loan and technical relocation assistance by the city. But none of them think it’s enough.

“With that kind of money, you cannot relocate yourself,” said Whadwa, “When we started construction about two years ago, we invested three times more than what they have been offering us. It’s just not practical.”

An email response from ESD says that they are continuing to work with the local community and the current tenants to ensure they have priority when the new building is complete. However, they did not offer specific comments on solutions to help these four shops.

At the latest public hearing, State Senator Bill Perkins, who backs the four owners, accused the National Urban League of unfairly replacing local small businesses. He argued that the owners in question did business in this area when nobody wanted to be here, and they deserve to be preserved on this street.

However, with the exception of Perkins, the business owners have failed to gain other help.

“Last week, we went to Albany, we tried to raise our voice, bring our concerns out,” said Whadwa. “I personally felt like we just went there, we were like a dog, you bark and came back.”

Ironically, the business owners are supportive of the Urban League’s relocation to Harlem. They just want to be fairly compensated for the destruction of their businesses and livelihoods. They want to be a part of Harlem’s future, said Whadwa. “But it doesn’t look like it is going to happen.”