As Homeless Number Reaches All Time High, More Families Turned Away at Shelter

Laying back on a squeaky wooden chair,  tilted back a little with the front legs lifted in the air, 29-year-old Christopher Coon took a swig of soda from a 2-liter bottle, looking content and relieved in a 160 square-foot motel room in Staten Island. On this chilly evening, Coon made barely enough money to pay for the room that kept his wife and 19-month-old daughter from sleeping outside.

Coon and his family are homeless.

They became homeless in February soon after Coon lost his construction job. Since then the couple has struggled to find a place to stay almost every night. After exhausting all of their other options, the family applied for a shelter through the city public shelter system but was quickly denied. 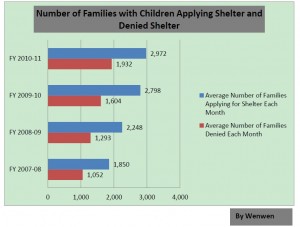 Amidst high unemployment and the loss of affordable housing, a growing number of New York City families are seeking help at municipal homeless shelters this year. However, with the shelter population reaching record highs at the same time, the City Department of Homeless Services (DHS) has denied shelter access to more families than ever. During fiscal year 2010-2011, 49,890 families with children applied for emergency shelter. Among those, 37,918 were found ineligible and denied shelter, driving the ineligibility rate to 65 percent compared to 57 percent last year.  Many families who were eventually accepted had to apply multiple times in order to show that they were really in need of a spot in municipal shelters.

After exhausting their options, Coon’s family applied for shelter through the Prevention Assistance and Temporary Housing (PATH) office, a family intake unit under the City Department of Homeless Services (DHS). Theoretically, this family with a toddler would be an ideal candidate for a permanent family shelter. However, after a 10-day eligibility investigation PATH denied the Coons request because they had relatives in Virginia and asked the family to leave their provisional shelter immediately.

Christopher Coon with his wife Tehisha and children Khloe, Tay’Vieon

“[PATH] put us outside at 11pm,” said Coon, whose family was found ineligible for access to shelters on the basis that they have other places to go.

Coon’s experience is becoming increasingly common in New York City. Frustrations are widespread across the city as more and more families find themselves getting denied for a spot in the public shelter system. Since the establishment of the Callaghan case in 1979, the city has been obligated to provide emergency shelter for individuals who are homeless by reason of poverty or due to mental, physical, or social dysfunction. The State Supreme Court’s ruling was a landmark decision, making New York a national model for caring for its most vulnerable people. However, with the sluggish economy and a city budget deficit that continues to widen, there are signs that the city is nibbling away this obligation.

“Initially it was the economic collapse that had this lagging effect on homelessness,” said Giselle Routhier, policy analyst at Coalition for the Homeless. “But also it has a lot to do with the policy of this mayor’s administration.”

The number of homeless families in shelters today is at an all time-high. As of December 2, the daily City DHS Services shelter census shows that 9,870 families are currently living in shelters. “That’s what the city has been doing,” said Routhier. “To keep the numbers from going up further, they just turn away more people at the front door.”

Although no official policy changes were announced, after the early termination of a controversial rent-assistance program early this year, the City DHS allegedly applied stricter criteria on eligibility rules to control the influx of families returning to shelters. The program, called Advantage, which offers subsidies to homeless families for up to two years, has drawn major criticism from homeless advocate groups since its inception in 2009, contending most families could not attain self-sufficiency in two years. “It is a revolving door back to homelessness,” said Ms. Routhier. 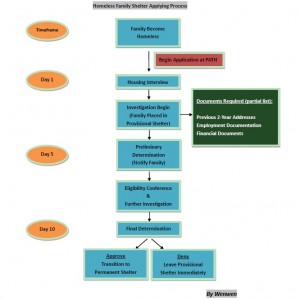 The application for shelter, some argue, is now prohibitively demanding, requiring families to put details of everywhere they have slept for the past two years prior to being homeless, every job each adult has held in the family, and other information such as bank account statements. Failure to provide the documents could easily result in a denial of shelter access.

Coon’s family was denied because they were inconsistently moving from place to place between February and August. They could not provide enough information of where they have been staying.

They now live day by day by selling poetries and crafts on the streets of downtown Manhattan. Without a steady income, Coon said he couldn’t see how they would be able to get out of homelessness. “Not knowing when you can get out of this, it’s kind of demoralizing,” said Coon.

For many families, returning to PATH and reapplying for a shelter seems to be the only option. While the rise of ineligibility rates show no sign of tapering off, many families have to apply multiple times in order to convince the city that they really have nowhere else to go. The latest city datashows that more than 40 percent of the families have to apply more than once to get into the shelter. 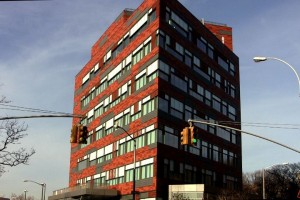 “If families coming in have to turn in three, four or up to six applications to get into shelter, that tells you there is something wrong with the application process,” said Ms. Routhier with the Coalition of the Homeless.

Unlike many other families, Coon chose not to return to PATH after they were denied. They had no choice but to stay on the street until they found a motel in Staten Island. At $45 a night, it is the cheapest he could find in the city but he still can only afford a few nights. The roach-infested, 160 square-foot room is crowded for the family of three. But Coon is convinced it is better for them to live in these conditions than subject his family to the grueling shelter application process again.

“I do not like the situation,” said Coon. But at least “no one can come to this door and tell me to get out. No one can put me out at 11o’clock at night with my kids.”

This entry was posted on Friday, December 9th, 2011 at 3:46 am and is filed under Housing & Health. You can follow any responses to this entry through the RSS 2.0 feed. Both comments and pings are currently closed.