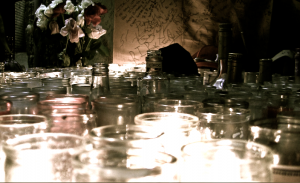 A memorial of candles and baseball caps were assembled outside the New West 111th St. Apartments at the exact place where Reggie Andrews was shot and killed.

New York, NY – For the last four years, Reggie Andrews had been in and out of jail and had been unable to spend his birthdays at home with friends and family. Andrews was turning 22 years old and was passing the day with his mother and his girlfriend. A home-cooked birthday dinner was being prepared for him in the upstairs apartment. Andrews, meanwhile, was fooling around on a bicycle down below when, according to the police, a group of young men approached him on the sidewalk. It was only just after four o’clock in the afternoon but suddenly shots rang out at the crossing of 111th street and Lenox Avenue. Reggie Andrews passed away on the pavement from a gunshot wound to his temple and two to his chest. It was November 12, 2011 and gang violence in Harlem had claimed another victim.

Many residents of the Harlem community refer to the violence as an “epidemic” due to the frequency with which it occurs. Nationally, the rate of gang membership has risen by 40 percent since January 2009, according to the Federal Bureau of Investigation’s National Gang Intelligence Center, which released its report earlier this October. The FBI has linked the epidemic of gang activity nationwide to better reporting.  But some experts argue with that conclusion, claiming that an exhausted economy is a much more likely culprit.

“When people don’t have jobs, when they’ve been displaced, the parent loses their job, they lose their apartment, they’ve been put into a shelter, they get moved from school to school – the stability is destroyed,” says Luis Osorio, director of the Cornerstone Program at the New York City Department of Youth and Community Development. “In order to maintain a sense of protectiveness and ‘famiglia,’ or family,  [young people] join together with other young people that are in the same type of predicament or circumstances.”

The Harlem community, along with other parts of New York City, has lost countless youth to gang violence in just the past few years. There were 244 shootings in Harlem’s five police precincts between January 2010 and November 2011, according to Manhattan Supreme Court Judge Edward McLaughlin who cited these statistics at a sentencing on November 29th for five members of crack dealing gangs from Harlem. Of those 244 shootings, 277 people were shot and 34 of those victims died. More than half of those shootings that resulted in injuries were gang related and 32 of the 34 victims who died were 16 years old or younger. Judge McLaughlin also noted that the estimate of gang-related violence is probably low due to a lack of witness cooperation with the police.

Andrews’s uncle, Reverend Vernon Williams of Harlem, once a gang member himself, says that belonging to a group is simply a survival tactic for kids living in impoverished communities with high rates of crime.

“We do ourselves a disservice when we say that kids coming from families with money are not in gangs,” he says. “You’re in a gang, you just don’t call it a gang. You just call it ‘hanging out with your friends.’ See, it’s given the evil connotation of a gang because of the poverty status.”

Reverend Williams agrees, however, that the problem with some of these groups is in their choice of behavior. While cliquing up is a human thing to do, using violence within and among those groups is not acceptable and is the result of a poor economy.

“The premise of a gang is ‘share the wealth,’” says Curtis Hoyte, a corrections officer at Rikers Island where he sees gang activity on a daily basis. “’If I have you have, if you have I have.’  Once one person is in there and they are doing what they have to do in order to get their quick money, the junior guy under him, he’s going to get something. But he’s obviously going to get something by having to do something else. So together, they’ll make money. “ He added: “It helps in a bad economy for a gang member, but it doesn’t help everyone else because everyone else loses.”

The current situation, says Osorio, is quite serious. “We’re looking now at an escalation in housing developments and other areas of gang membership,” he says. One of the biggest factors is the lack of options for young people.  “The devastating effect of the economy, the reduction in budget allocations for the summer youth employment program has increased membership in gangs because these young people would have been working. Now they’re on the street.”

Meanwhile, although a down economy may fuel gang activity, for some the solution does not rest just on economics. Reverend Williams argues that what needs to happen is not only an increase of available social programs for jobless teens, but the community needs to first acknowledge the epidemic of violence.

This entry was posted on Friday, December 9th, 2011 at 3:47 am and is filed under Education & Employment. You can follow any responses to this entry through the RSS 2.0 feed. Both comments and pings are currently closed.