Can Single-Sex Education Break the Cycle of Poverty?

Liana Sarantos is a single mother of four in Brooklyn who relies on the local food bank, food stamps and energy assistance, among other programs to survive month to month. Her meager annual salary of about $16,500 and child support of about $3,900, “if he pays,” have qualified her to live in subsidized housing where rent payments are based on a family’s income.

“Without that, I’d be outside in a tent,” Sarantos says. “I don’t even know what would happen.”

Sarantos is not alone. About 15 percent of Americans have fallen below the poverty line, according to the 2010 United States Census Bureau poverty distribution report. The official federal poverty line for a family of two adults and two children is $22,113. Research shows; however, that a family of four needs an average income of about twice the federal poverty level to cover basic expenses. Using this standard, 42 percent of America’s children live in low-income families.

Across the country, 28.7 percent of all female-headed households in the United States live below the official poverty line. Based on the supplementary poverty measure, that number is twenty-nine percent, an increase of 1.1 percent from 2009. Of all families living in poverty, 38.2 percent have a female head-of-household.

The percentages are similar in New York City. The number of single mothers and their families living below the poverty line increased from 33 percent in 2008 to 36 percent in 2009. Statistics for the change between 2009 and 2010 have yet to be released by the New York City Center for Economic Opportunity.

Because children often model what they see, a child raised in a low-income family is likely to remain in that station of life. “It’s definitely generational,” says Jim Martin, Executive Director of Project Comeback, an employment-training program for formally homeless men and women in New York City. “They didn’t see their mother and father get up and go to work in the morning.”

The Gap: Then and Now

Collectively, women working full-time and year-round in the United States made 81.2 cents for every dollar earned by a man, according to U.S. Department of Labor. Women in New York earned an average of 86.8 cents to the male dollar.

This is progress from the 59 cents to a dollar wage gap in 1963, but not nearly the equal pay so promised by the act. The Equal Pay Act prohibits sex discrimination in the workplace surrounding pay for a job requiring “equal skill, effort, and responsibility, and which are performed under similar working conditions.” It allows for discrepancies based on seniority, merit or qualifications other than gender. “Wages and equities are directly linked,” says Beverly Neufeld, Vice President of the New York Women’s Agenda and Director of the Equal Pay Coalition NYC. “The wage gap is often the difference between making it and breaking it.”

The last 38 years have afforded American women a 28-cent gain on the male dollar. That’s an average of 1.36 cents per year. At this rate, the United States will close in another 14 years.

Why Women Are Paid Less

Those who try to rationalize the wage gap often attribute a woman’s lesser salary to putting her families first. As the ones physically birthing the children, women generally need time off immediately pre- and post-childbirth. Mothers, and single-mothers in particular, have a tendency to be the ones leaving early or missing a day of work when a child is ill.

All working parents have to worry about child-care. For dual-income families, covering the cost of such a luxury is more manageable than it would be for a single-mother, especially a single-mother with limited education, as those living in poverty often are.

Predominantly female jobs tend to pay less than predominantly male jobs. The reasons are not clear. Some point to American socialization as the culprit in devaluing “pink-collar,” or predominantly female, jobs. Children grow up learning that certain jobs, like caring for children or answering phones at an office, are “women’s work,” whereas landscaping or plumbing are “men’s work.” The pink-collar jobs generally require less education, less skill and/or less physical labor.

Among receptionists, a job considered pink-collar, there is a gender wage gap. Women earn an average of $529 dollars per week to men’s $547. Over the course of a year, that’s almost $1,000 for doing the same job.

Higher education leads to a higher salary. Annually, women with a college degree make an average of about $31,000 more than those without a high school diploma. Because of this, some see all-girls schools as an obvious way to female upward mobility.

“Every grade that you finish and accomplish, increases your ability to earn, your income, your potential income as you go forward into the future,” says Ryvta Soni, an art literacy and special education teacher at The Young Women’s Leadership School (TYWLS) a charter school in Brooklyn. 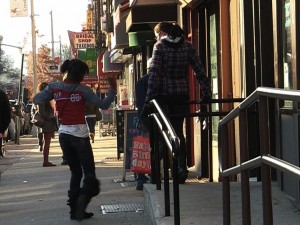 Soni and other faculty at TYWLS make attending college a focus of their all-female, predominantly low-income students. These

Still, there are more families in need than innovative schools like these could ever accommodate. With or without resources, parents prioritize their children and their children’s futures.

“Sometimes you yourself go without,” says Sarantos of making ends meet for her family. The stresses of raising a family of four on less than $21,000 a year weigh heavily on her. With more support, she says, not just monetarily but camaraderie, she and other single mothers could better support their children.

“It’d be nice to know you’re not alone and be around other women in the same situation,” says Sarantos. “If Mommy’s happy, then kids are happy.”

This entry was posted on Friday, December 9th, 2011 at 3:08 am and is filed under Education & Employment. You can follow any responses to this entry through the RSS 2.0 feed. Both comments and pings are currently closed.