Surviving A Food Gap In The Land of Plenty

Surviving A Food Gap from Chiara Norbitz on Vimeo.

Hunts Point boasts some of the highest obesity and diabetes-related mortality rates in the city. To ameliorate these persisting health risks, some government agencies and community organizations have implemented programs to increase the area’s access to fresh and healthy food – with mixed results.

The Hunts Point neighborhood in the South Bronx is home to the world’s largest food distribution center—the Hunts Point Market—which includes three separate sections for meat, seafood and produce, and employs more than 12,400 people at its 200 on-site businesses. The Market’s reach is expansive. It supplies food to nine percent of Americans nationwide and restaurants, supermarkets, and corner produce stands flock to this distribution hub daily for its wide variety. Yet, there is one group that still struggles for access to this monolith of abundance: Hunts Point residents.

The fraught relationship between the Hunts Point Market and its neighbors in the community is a model example of the food insecurity that pervades other low-income neighborhoods across the city – fresh and healthy food is either unaffordable or completely inaccessible. By contrast, more affluent areas are rife with options.

For example, Union Square, where residents earn a median income of over $138,000, is an epicenter of nutritious food; there is a year-round farmers market that boasts 140 vendors at peak season and a grandiose Whole Foods Market. Hunts Point, on the other hand, is in the poorest congressional district of the country, where the median income is $24,000 and 20 percent of residents are unemployed. The neighborhood is replete with cheap and quick food options at mini market bodegas and fast food chains, and hosts a few supermarkets with meager pickings.

Some residents who wish to buy healthier foods but are frustrated by the limitations of their local stores will commute to other areas to stock up on groceries. “Usually I go to BJ’s [in] Westchester County and New Rochelle, and I buy in bulk,” says Joanna Liatto, a Hunts Point resident. “But if you’re limited in terms of transportation, you do your best with what you’re going to buy.”

“It’s tough in this neighborhood to find something easy, fast and healthy because it’s not really available,” says Aisha Jordan, who works in Hunts Point. “We have the bodegas, we have Subway, or McDonald’s and Burger King, and those are fast and easy, but if you go to Jimbo’s and you want a salad, they don’t really have salad.”

In recent years, city government agencies have implemented programs to respond to the lack of nutritious and affordable food in low-income areas. One such program is the Shop Healthy Initiative, operated by the NYC Department of Health and Mental Hygiene (DOHMH).

In June 2012, the DOHMH unveiled the Shop Healthy Initiative in two areas of the Bronx: West Farms and Fordham. According to the DOHMH website, the initiative is designed to engage local residents and organizations who are “interested in working with local food retailers to increase healthy offerings, like fresh fruits and vegetables, 100% whole wheat bread and low-salt canned goods.” Residents and organizations “adopt” a bodega or supermarket and work with them to assess and modify their inventory. In June 2013, the DOHMH expanded this program to three neighborhoods in the South Bronx: Mott Haven, Longwood, and Hunts Point.

The DOHMH said via e-mail that these neighborhoods were chosen based on census data and independent surveys. Records collected indicated that “two-thirds of [South Bronx] residents are either overweight or obese, more than 95% of residents report not meeting the recommended daily intake of fruits and vegetables, and 4 in 10 residents report that it is either difficult or impossible to find high-quality, affordable produce in their neighborhoods.”

Fair Farm Supermarket in Hunts Point is one of the Shop Healthy participants. Its manager, José Cristopal, admits that although Fair Farm became involved in the initiative through a customer, no changes were made to its inventory. Rather, the store was given small signs to post in its aisles, indicating low-sodium products in the canned bean and boxed pasta sections. 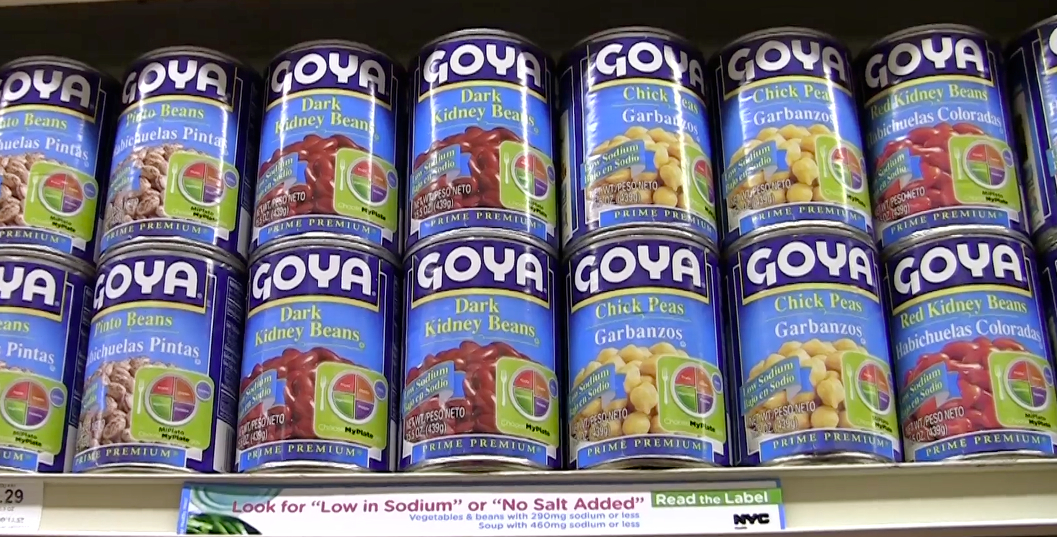 Even though the Shop Healthy Initiative supposedly hinges on community engagement, many Hunts Point residents are not even aware that the program exists. “I haven’t heard of it, I don’t know if anyone else has heard of it, but I think it’s a great idea,” says Jordan. With this disconnect between policy and the people, it’s hard to conceive how this program will get off the ground.

The DOHMH shirked multiple phone calls over several weeks and limited their communication to e-mail. When questioned about the impact of the program and a complete participant list of vendors, the DOHMH responded with vague and nondescript answers. The Center for Economic Opportunity, indicated as a funding partner of the program on the DOHMH’s website, was also unresponsive.

Food experts speculate about the challenge for government programs like the Shop Healthy Initiative. “I don’t think policy alone will solve the problem,” says Carolyn Dimitri, an Associate Professor of Food Studies at New York University. “You just can’t say ‘well this store should change everything’ and all of a sudden people are going to flood in and start buying these other products…You have to know how they feel about food in general and have them become more invested in the concept of eating these foods.”

There are a few local food movements in and around the Hunts Point area that are striving to assist residents in making healthy eating a lifestyle, rather than just an ad hoc choice. 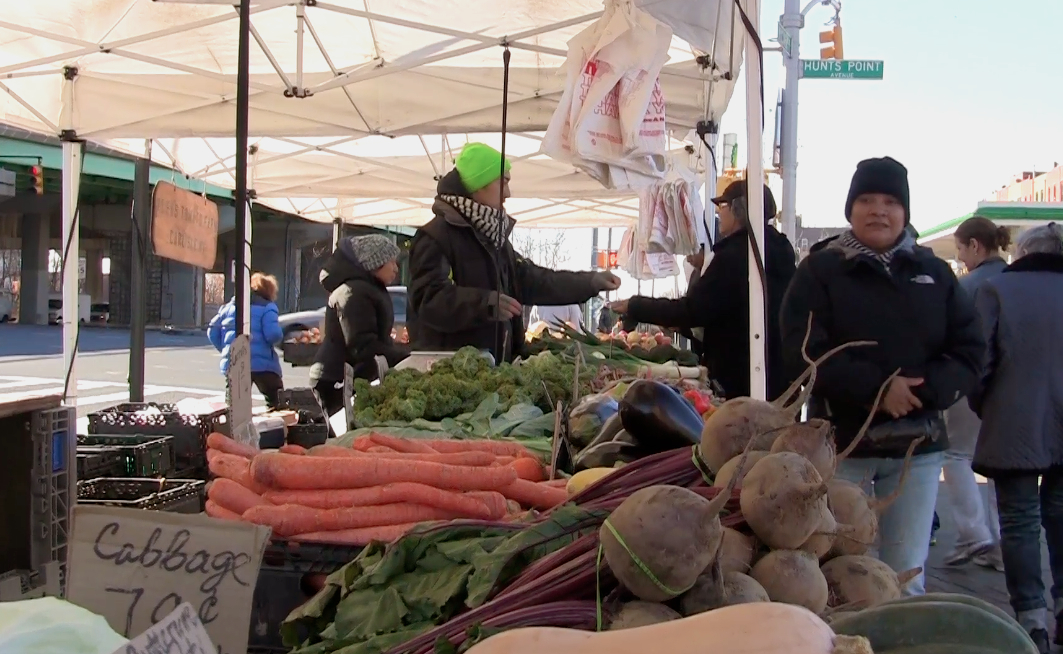 The Corbin Hill Food Project, based in Harlem, coordinates the delivery of fresh produce from local upstate farmers to The POINT, a Hunts Point nonprofit that provides the space for residents to purchase this produce on a weekly basis from mid-June to mid-November. Down to Earth Markets, in Ossining, NY, has organized a farmers market in Hunts Point for the past decade. Both of these markets provide customers with recipes to help them maximize their seasonal produce.

Despite programs that pair education with access, affordability remains the ultimate barrier to healthier eating for Hunts Point residents.

Laura Torres, who attended the Down to Earth farmers market for the first time in late November, was astounded at the price she paid for a few potatoes and peppers. “This market is too expensive,” she said. When asked if she will go to the market again, she responded, “I’ll go to the Fine Fare [supermarket]. Over there it’s cheaper than here. Not that good like here, but it’s too expensive.”

Fearful that higher farm-fresh prices will dissuade low-income customers, the Down to Earth farmers market accepts payments with WIC checks and provides occasional coupons, which is what attracted Torres. The Corbin Hill-POINT market offers a “money match program” that gives those receiving SNAP benefits or living below the 200 percent federal poverty line a price reduction.

“People pay two-thirds of the regular price and then we pay the other third of it…a lot of people who are coming to our site in Hunts Point are on that program,” says Carey King, Communications and Education Director at Corbin Hill.

However, King acknowledges that despite all of their efforts to subsidize prices, opting to buy higher quality, yet more expensive, farm-raised food is still a deliberate choice that many residents are not yet willing to make. The challenge for Corbin Hill, like many other local and government programs, is how to make that choice the rule and not the exception.