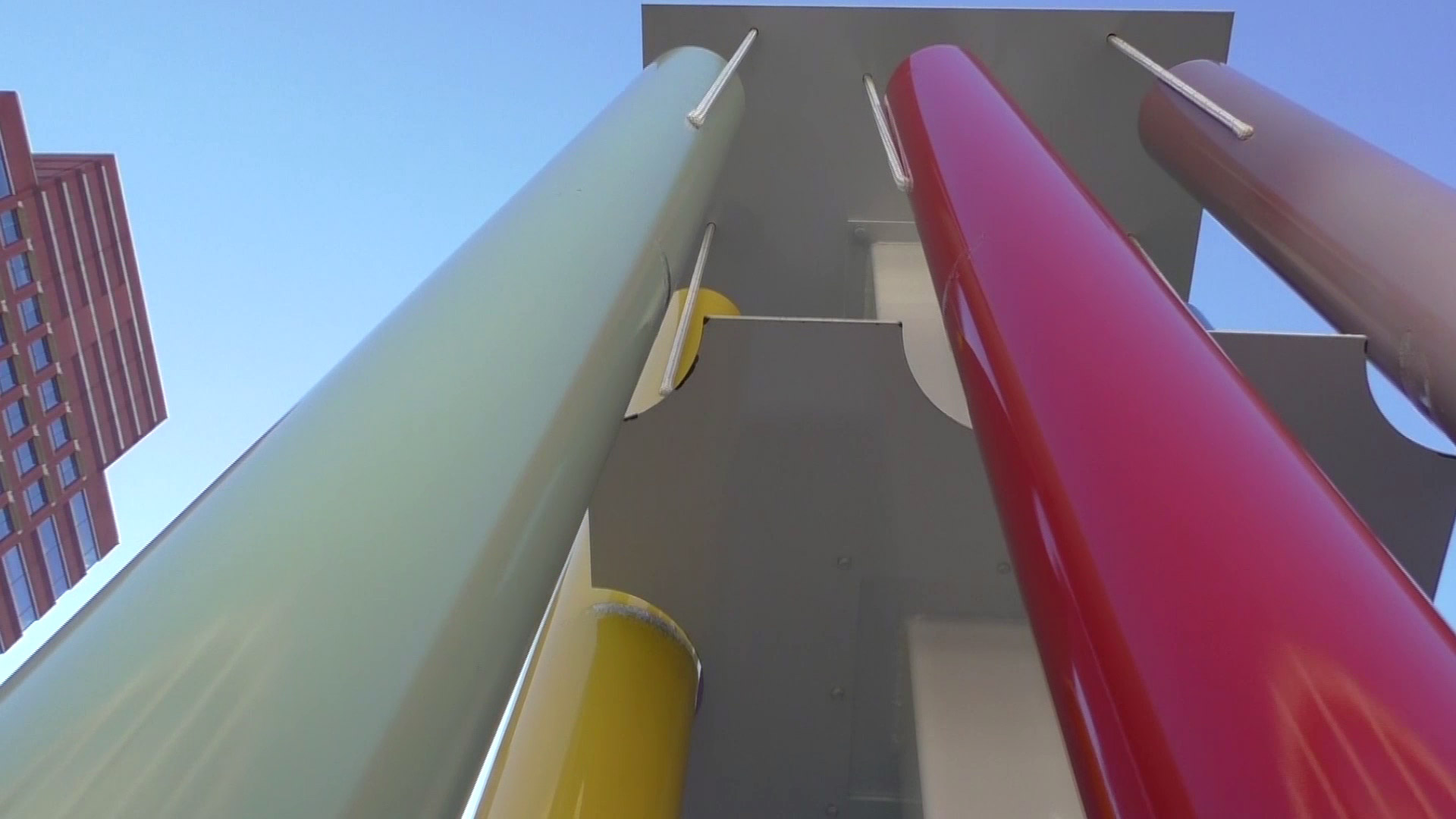 Walking down Livonia Avenue, a main street in New Lots, East Brooklyn, one cannot help but notice how badly-lit the area is. Livonia Avenue sits under the platform of the 3 subway train line that covers about a quarter mile of the street, successfully blocking most direct sunlight that comes in during the day. The blocks are often empty as many residents avoid the area at night due to lack of lighting. 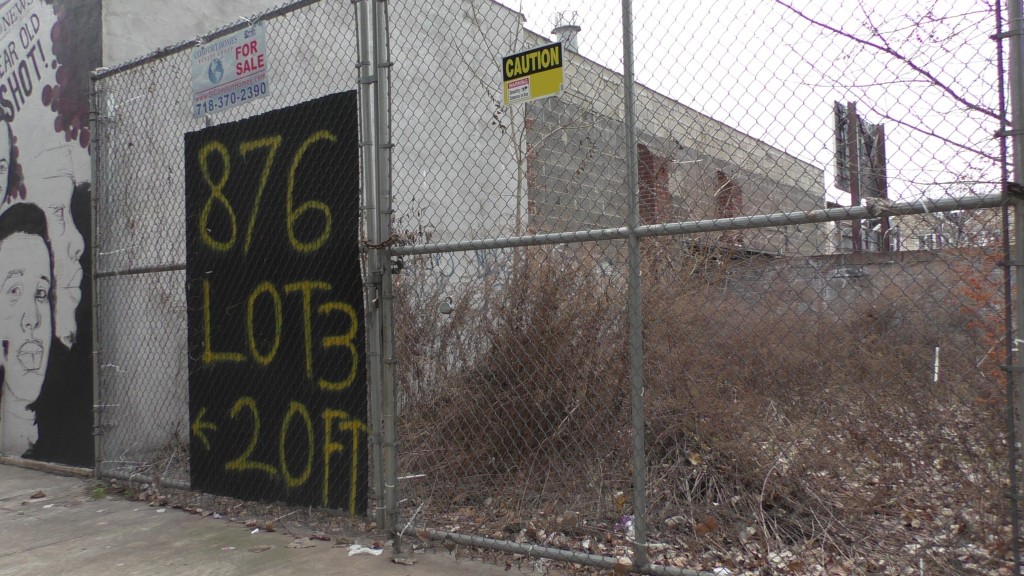 A vacant space on Livonia Avenue

There are many abandoned lots along the avenue and also around the neighborhood, and like many streets in East Brooklyn, these spaces are often unsanitary. New Lots has been struggling with a lack of resources and negative stereotypes for many years, and it also struggles to better its physical appearance. However, in recent years, many community members in New Lots have been working toward combating these challenges and seeking to reactivate these vacant lots through visual and performance art activities. 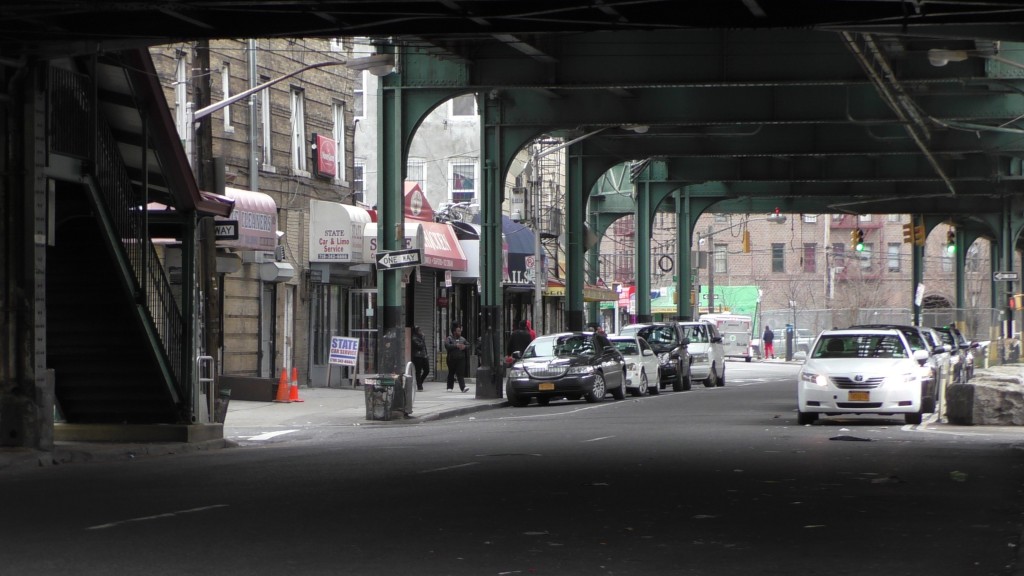 Creating activities in a vacancy

“Creating art, and filling a vacant space and creating an activity there, [lets the] community understand that these vacant lots in the neighborhood don’t have to be vacant and just sit there and become hubs for negative behaviors,” said Catherine Green, the Executive Director of ARTs East NY, an East New York-based arts non-profit. In the summer of 2013 ARTs East NY partnered with Cypress Hills Local Development Corporation and initiated “Mi Tierra,” or “My Homeland,” which is a project to renovate the neighborhood’s empty lots. The program transformed a 10,000 square foot vacant lot, which was waiting for a slated affordable housing project on Pitkin Avenue to begin construction, into a community art and recreational area. 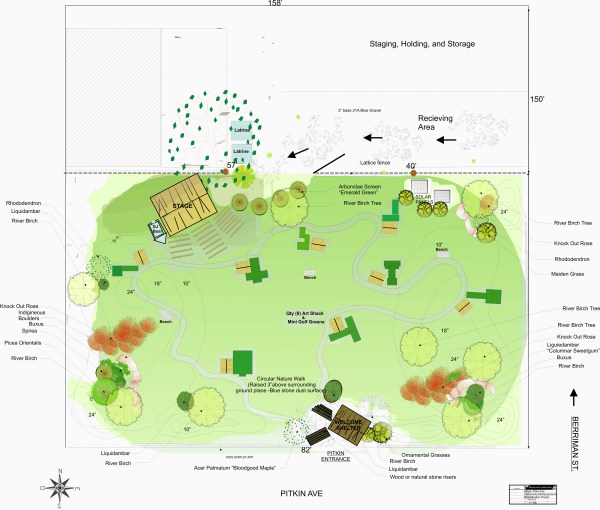 “Mi Tierra” is just one of the efforts across the City that seeks to encourage active living with cultural and art activities. This transformation is known as “activating a public space,” and when successful, the space becomes what is called a “public domain,” because people are forced to interact in a public setting.  The art community argues that art can facilitate community engagement in public spaces — whether in abandoned space like the lots in East New York or busy streets in Midtown. This can lead to the creation of public domains by making areas more pleasant.

Throughout the summer of 2013, “Mi Tierra” gave the local community a chance to attend fitness and dance classes without having to go out of their neighborhood. ARTs East NY also organized various events at the site, such as film screening, cooking classes, and live music.

“We created this huge environment as an artist base, and what we also did was we created this outdoor space for yoga classes, for exercise classes, and for all sorts of things throughout the summer,” said Green. “So we are really promoting active living and activities within this vacancy.”

While “Mi Tierra” started in a vacant lot in Brooklyn, Summer Streets in Manhattan is an example of  an art-activation of a busy public space. The City Department of Transportation initiated Summer Streets in 2008, which is an annual event where nearly seven miles of the City’s main streets – extending from Brooklyn Bridge to Central Park are closed to motor vehicles and opened for the public to run, bike, walk, and play. Events like lectures and fitness classes are planned along these streets for the public. Just like “Mi Tierra,” many art performances and interactive installations also anchor Summer Streets, which include outdoor musical, theatrical and dance performances, as well as art and craft classes.  According to the City government website, more than 300, 000 people came to Summer Streets in 2013. 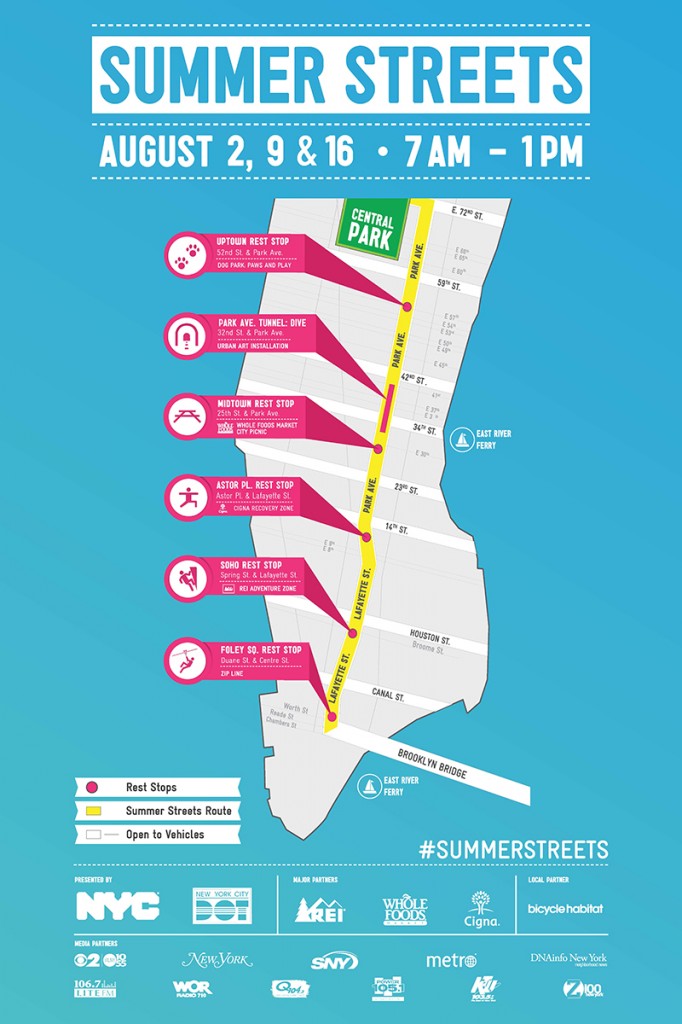 “We produced two large scale [art] installations at the Park Avenue Tunnel. The first one that we did two years ago invited the public to walk through a seven-block tunnel to get people to cycle up to the tunnel and into the space on foot, and then to interact by speaking to an intercom and sharing their voices about the community and what New York City is to them,” said Emily Colasacco, the Director of Public Art Program at the City’s Department of Transportation.

Activating the City’s busiest streets into recreational space allows visitors and residents to think about their daily urban environment differently. “We really think that art could add to the overall mission of Summer Streets,” said Colasacco.

Although Summer Streets is marketed as a recreational effort, artists see the project as an effort to activate busy streets and to encourage healthy lifestyle through artistic approach. Adam Brent, an art professor at The New School and a DOT Art advisory committee member, thinks of Summer Streets as an example of how activating space through engaging artworks helps encourage active living.

“[The organizers] have an eye for engaging works that spotlight notions of mobility and how we can explore and take advantage of our city that does not involve vehicles – just on foot, and on bikes, and other active things,” said Brent. “So active work [and] engaging work fit into that very well.”

During the renovation project of “Mi Tierra,” community members also volunteered to help clean the vacant space. Volunteers also helped build a miniature golf course, a stage, and a Zen garden in the newly-transformed park. Community space-activation projects like “Mi Tierra” opened a way for community members to engage in active living through art not only after the completion of the artwork, but also during the production process. Other artwork projects around the city, like barrier beautification projects organized by the Department of Transportation, although not as community-driven,  also require labor during the installation process. According to Colasacco, this process provides the local community an opportunity to stay active by participating in the art-making process.

“Local volunteers come out during the course of an entire day, painting alongside an artist [and] in some ways you can see that as an active lifestyle,” said Colasacco. “You are on your feet for eight hours, you are physically lifting paintbrushes, and you are out there, and you are working for many hours.”

By activating a space with art, people will also be actively engaged with their surrounding through conversations that take place between the art curators, the artists, and also the community members. The simple act of drawing people out of their homes into the streets of their community can be the first step towards successful active design.

“[Art] makes people consider their spaces with the artist’s in a different way – at least the most basic level,” said Jennifer Lantzas, Public Art Coordinator from the City Parks Department. “So [art] serves to start that dialogue and [make] sure that people are aware of their surrounding.”

As art projects in the City are expected to create new dialogues and activities in local communities, funding bodies and art commissioners at the administrative level have increasingly receive requests from local communities and community groups, such as ARTs East NY, for public artwork projects. The funding bodies and art commissioners are also more interested in how the projects bring new dynamic into a local community, rather than focusing on just the artistic quality of the project.

“At the DOT, we are being asked to not only consider not only the work itself, or the artist itself, but who is involved, what kind of partner in this community is this artist is working with already, or can fit with, to come up with something more tailored to that community,” said Brent, who has been on the DOT Art Committee for almost two years. “That is the part and parcel of organizing a space.”

Right now, the vacant lot that was the site of “Mi Tierra” is no longer vacant — the affordable housing project that it was waiting for has started its construction process on the site. But it does not mean that the New Lots residents will no longer have such community-driven art-activated space that helps them enjoy an active life.

At the moment, ARTs East New York is exploring the concept of art-activating a public space further. The organization is currently working on “[re]New Lots” project which is a part of the neighborhood revitalization plan. Through the project, the organization utilizes the similar artistic approach and plans to transform two more of the neighborhood vacant lots at the intersection of New Lots Avenue and Van Sinderen Avenue. The lots will house retail spaces, art studios, dining area, and outdoor performing space, and it will bring artists, local entrepreneurs, and the local community together. Most importantly, it will also recreate the active outdoor space like in “Mi Tierra,” to encourage active living in the community.

“There will be open, free dance classes for the community, yoga, fitness, zumba – that the community can be a part of,” said Green. “We are also including bike racks, and really pushing the public transportation [authorities] to install bike lanes there as well,” said Green.

To Green, while this space-activation art project encourages the community participation in active living, it ultimately helps the neighborhood to grow together. She hopes that adding engaging, active spaces will not only help her community build physical health, but it will also help building mental health by instilling community pride among residents.

“We are here to deal with all the negative stereotypes about the neighborhood that not only affect people from outside, [because] sometimes even local community buy into those stereotypes,” said Green. “We are a beautiful community, filled with talented people, we have all sorts of things to offer. We have a strong infrastructure, and we just need help building it.”