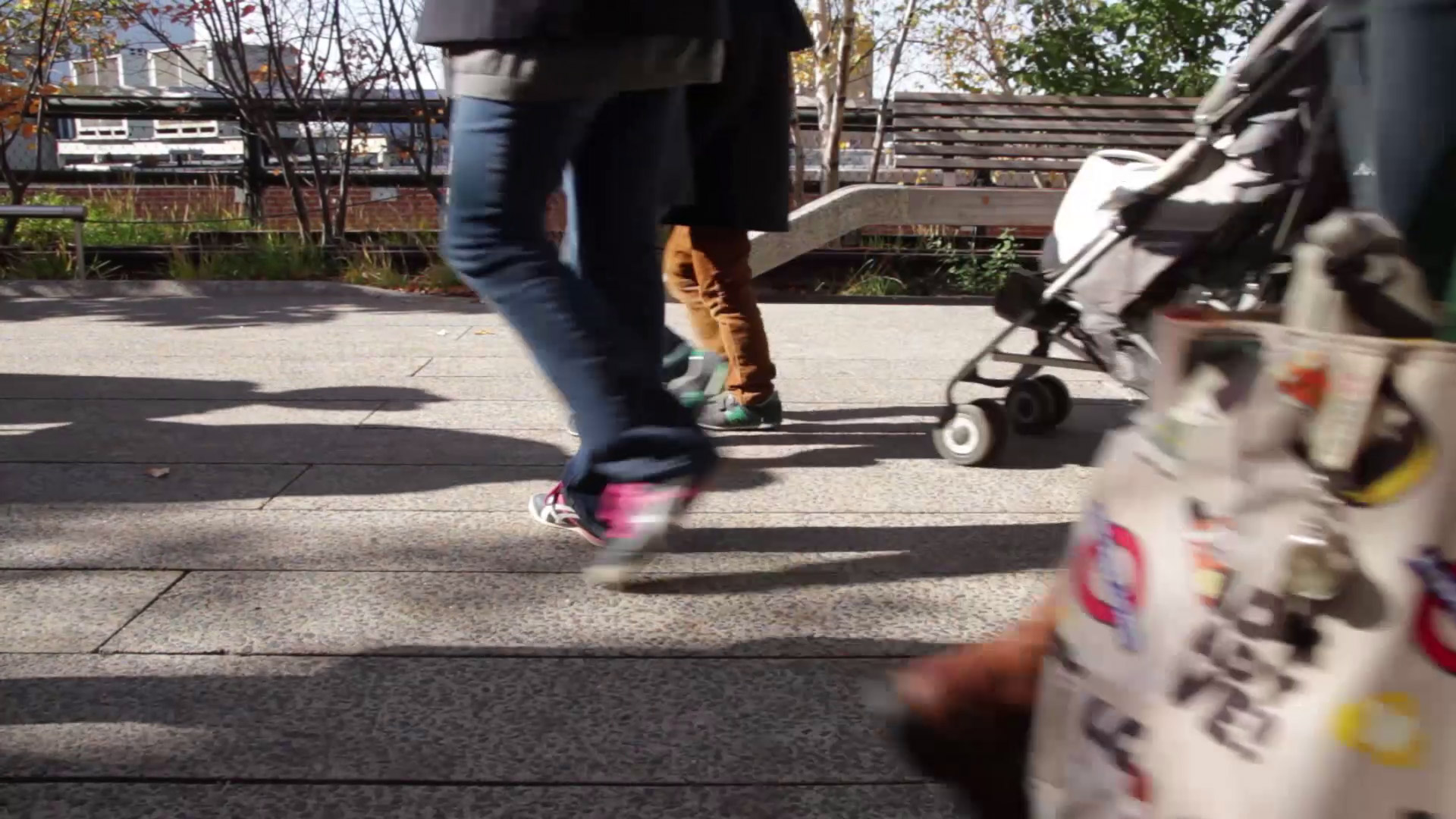 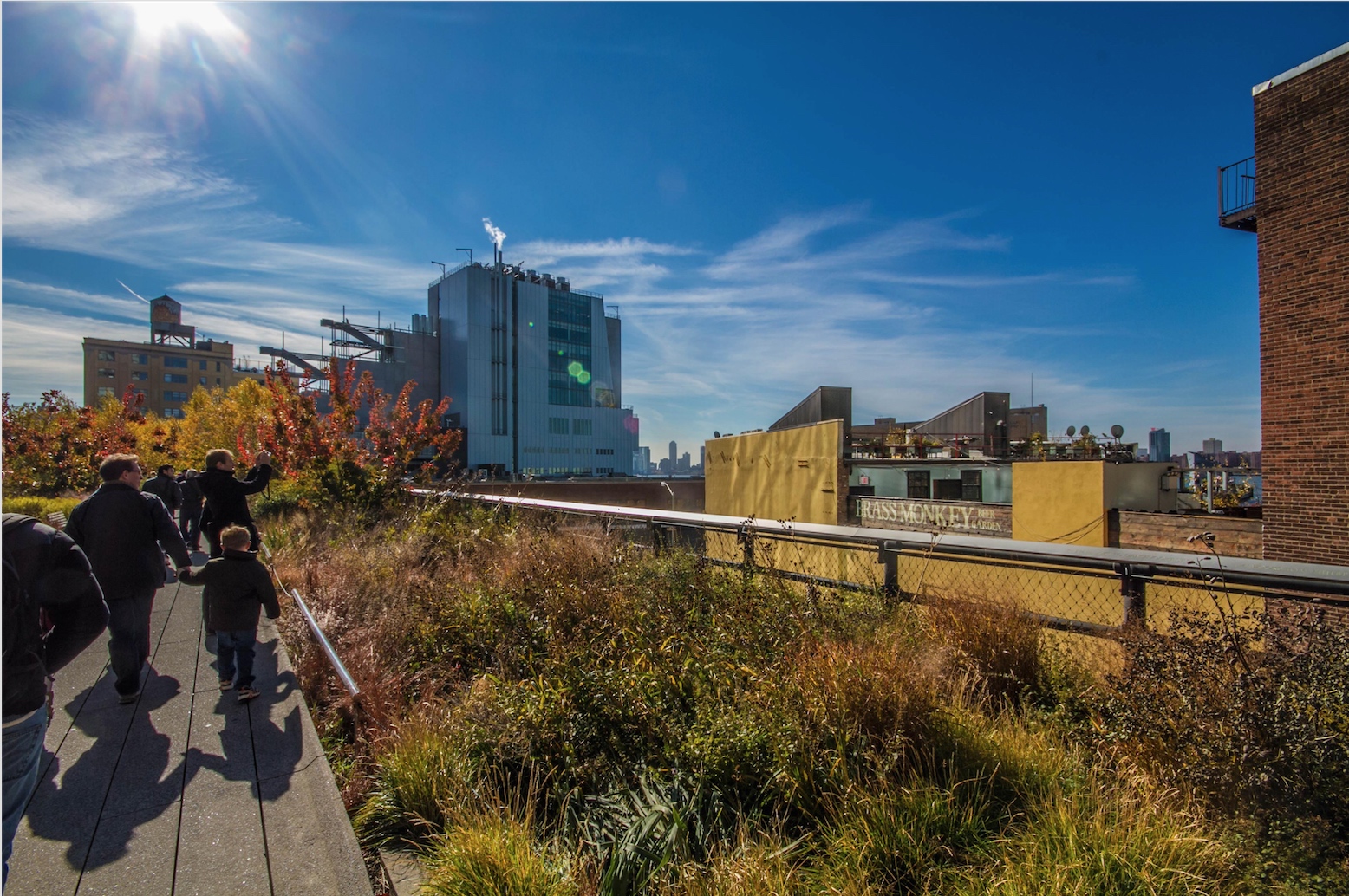 NEW YORK CITY – It was a bright cool Sunday afternoon on the wooden deck 30 feet above 10th Avenue, close to the Chelsea Market access to the High Line. A slow but steady walking crowd strolled the autumn scene of brown and yellow grasses interwoven with the concrete and steel benches that pave the 1.45-mile linear park.

“I like the plant life and the historic atmosphere, I think it’s great to see the cross between the old and the new. It’s interesting to see the city evolve to meet new needs,” said Eric Parsons, an IT worker from Downtown New York who took his baby boy out to see the repurposed railway for the first time.

The High Line Park’s design is a perennial example of how certain American cities are finding an alternative purpose for disused industrial infrastructure to encourage people to spend more time walking outdoors. The architecture and landscaping of the park encompasses an inviting combination of horticulture and modern design which draws an estimated 4.8 million visitors per year according to a recent New York Times report. The city of Chicago is currently converting a railway line into a a 2.7-mile linear park known as the “Bloomingdale Line” while the City of Atlanta hopes to use railway tracks as greenways to connect a number of existing parks. The repurposing trend occurs in the context of local residents advocating for development of public spaces but also in the wake of local governments’ awareness of rising health concerns associated with lack of access to spaces that promote physical activity.

“Linear spaces like The High Line, the Atlanta Beltline and the Bloomingdale line in Chicago are attractive because of their large scale which connects diverse neighborhoods,” said Meta Brunzema, adjunct professor of Architecture at Pratt Institute. Nevertheless, Brunzema believes that several existing parks and public spaces should also be transformed for various fitness activities like jogging and biking so that the spaces are not just limited to being slow pedestrian walkways located in prosperous parts of the city.

“It is necessary to transform existing parks and public spaces for fitness because linear parks are often far from neighborhoods that need these amenities the most,” she said.

Designs to Stop an Epidemic 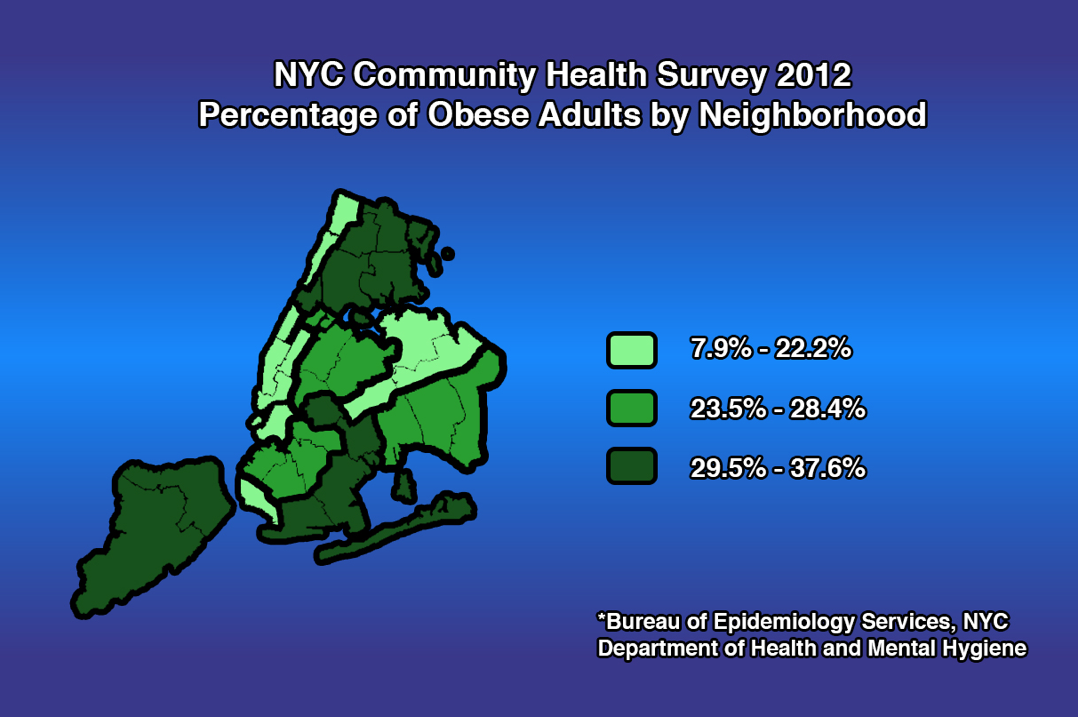 According to a Community Health Survey done by the NYC Department of Health and Mental Hygiene published in 2012, the percentage of obese adults in Manhattan ranged predominantly between 7.9 percent and 22.2 percent while several neighborhoods in the Bronx, Brooklyn, Staten Island and Queens were in the range of 29.5 percent to 37.6 percent. The five neighborhood areas with the highest percentage of obese adults were the Northeast Bronx, Northern Staten Island, The Rockaways, Fordham/Bronx Park and East New York/New Lots.

The need for infrastructure that could abate health problems associated with sedentary lifestyles prompted the City of New York to produce the “Active Design Guidelines” in 2010 as a part of a larger city planning initiative under former Mayor Michael R. Bloomberg. The publication established how chronic diseases associated with obesity became the “predominant cause of death in the city” and that building design could work to prevent them. The handbook offered a list of recommendations for designs in stairways, bike lanes, side walks, playgrounds, plazas and parks that would hopefully encourage people to walk for longer durations and more regularly in their everyday lives.

Horticulture as an Escape From the City 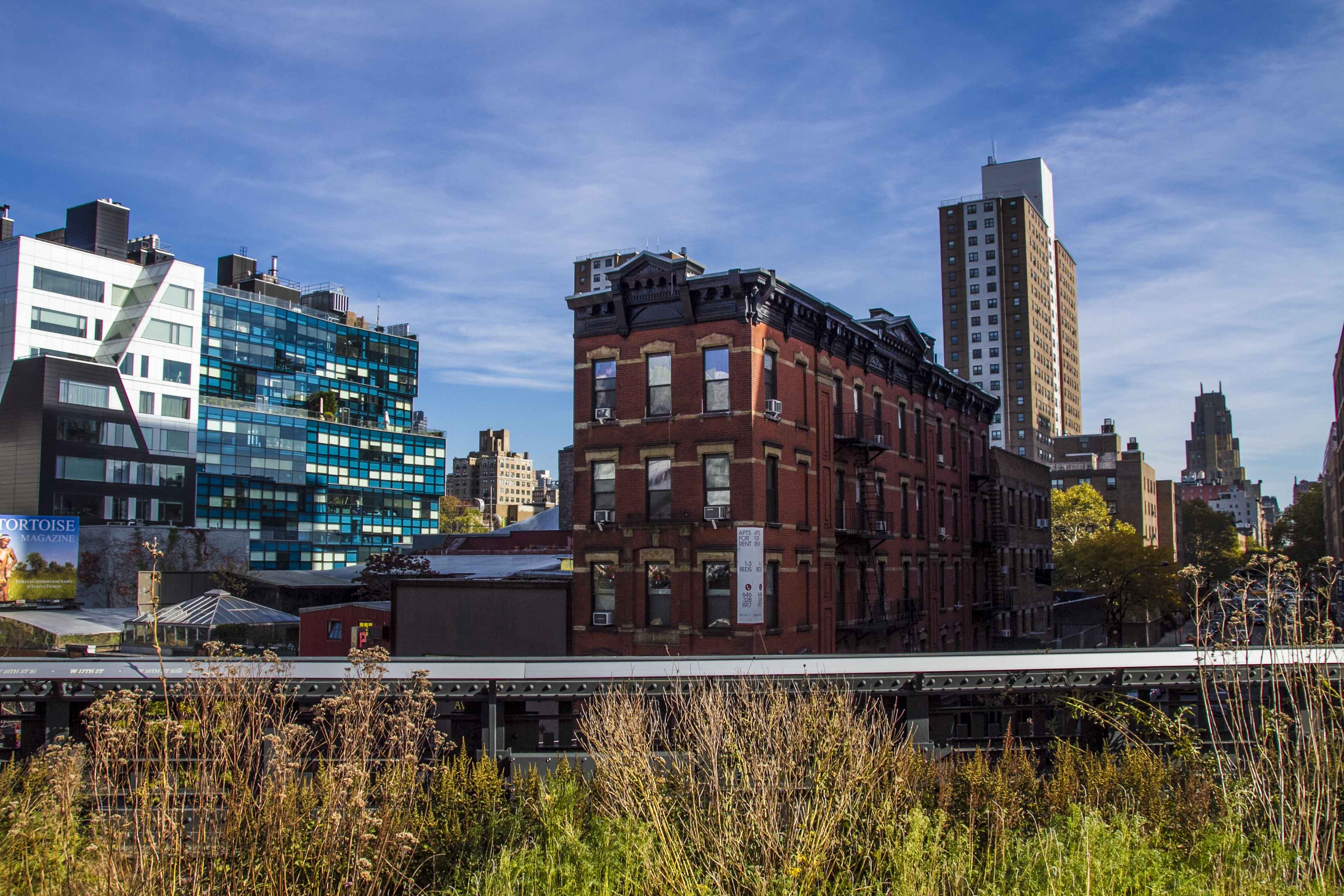 The High Line is featured as a case study in the Active Design Guidelines for encouraging stair climbing, walking, relaxation and the highlighting of natural elements. The structure was originally built in the 1930s to connect factories and warehouses, but with the decline of the area’s industry it deteriorated and was scheduled from demolition. It was Joshua David and Robert Hammond, two residents of the railway’s neighborhood who advocated for the repurposing through the “Friends of the High Line Organization” and with the help of the City, the railway was successfully turned into a large scale public green space.

Architects Diller, Scofidio and Renfro teamed up with Landscape Architect James Corner of Field Operations to produce a series of natural experiences through a linear walkway that included meadow like spaces, enclosed woodlands and shrub tree areas. Thomas Smarr, the Director of Horticulture of the High Line explains that these designs stem from four general principles which were to keep the park simple, slow, quiet and wild by including the kind of plants that were there before the space was repurposed.

“These kinds of green spaces are going to be ever more important in the future. Our cities are expanding and if we’re going to continue wanting them to be productive and livable, its going to be very important that people have places to escape to,” said Smarr. 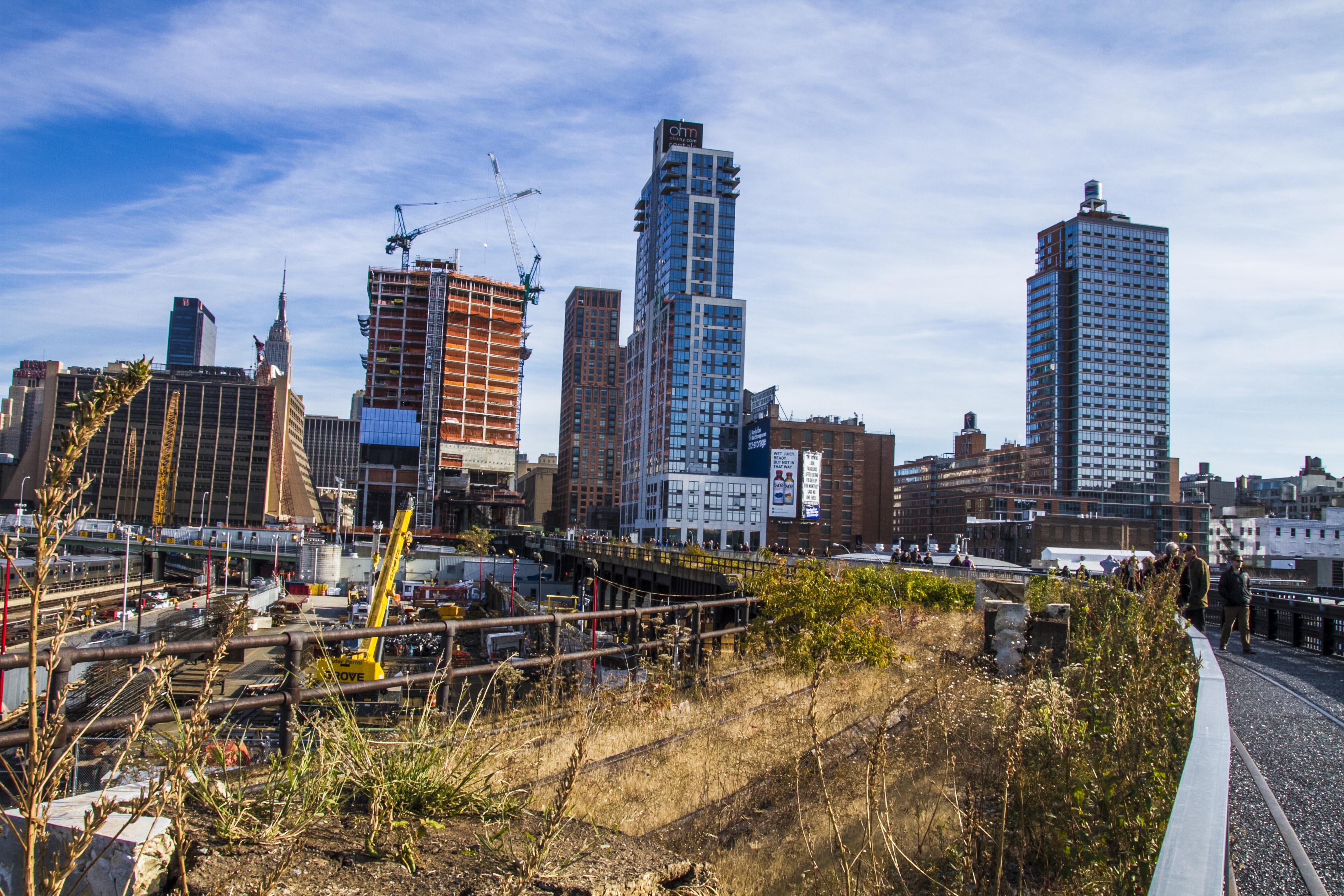